That there is some snake skin.

I remember seeing my first snake when I was a kid — I was maybe six, wandering through the woods and fields behind my house, and my father was nearby but out of sight. I stumbled upon a rotten, hollowed-out stump, and sitting in the middle of that stump was a garter snake. I lost my shit. I fucking screamed like I had just seen someone get murdered. But I couldn’t move. I was paralyzed with fear. That, or TRANSFIXED BY OPHIDIAN HYPNOSIS. Either/or.

Regardless, by father came running, certain that I was about to be eaten by a Yeti or something, but turns out, nope, just a li’l ol’ garter snake. He picked it up and showed it to me and it was of course harmless, and I wasn’t scared of snakes anymore. My kid has none of that fear that I possessed — because the other day, when I lifted up a stone, I found this fancy fellow: 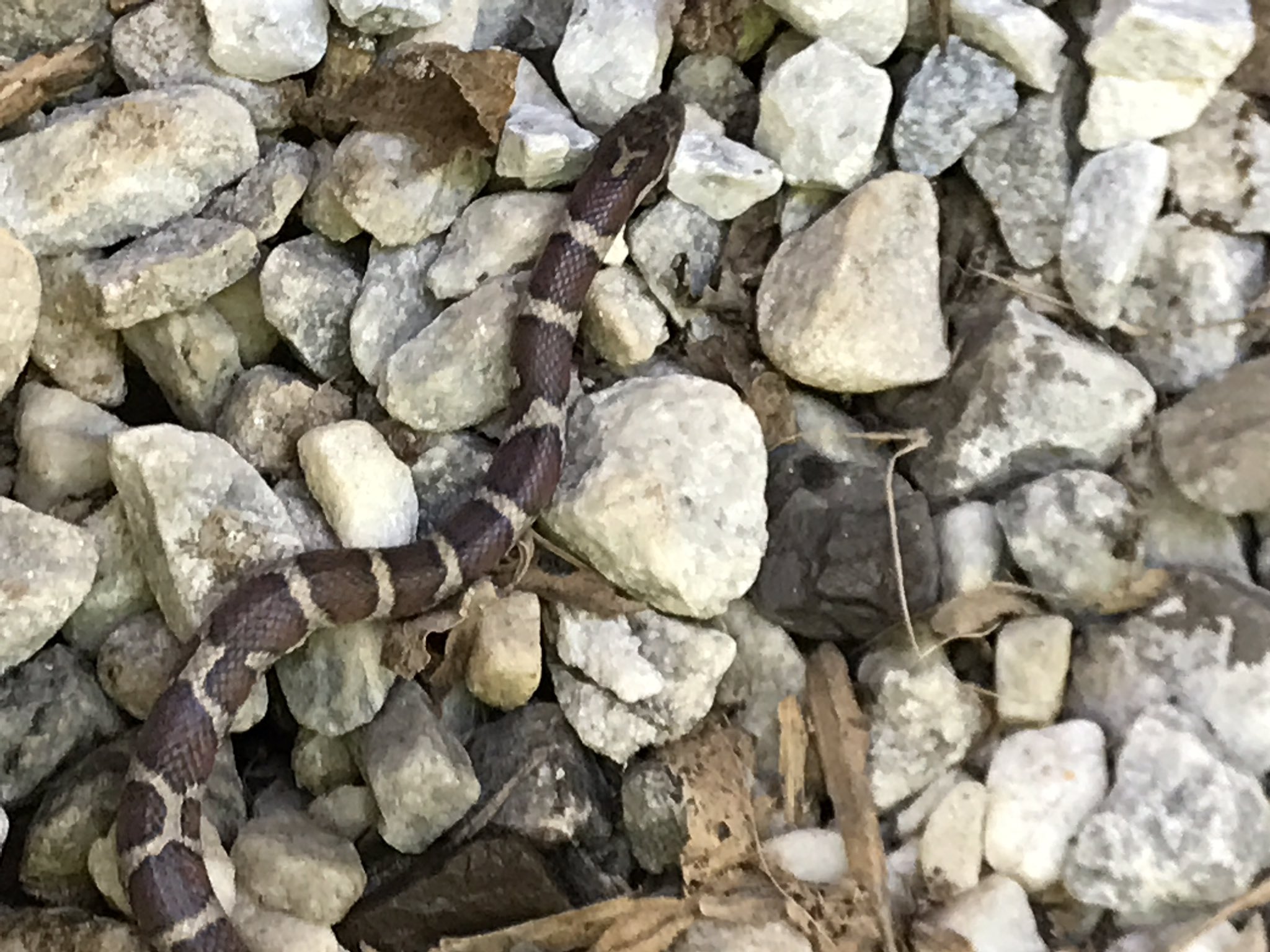 Folks around here tend to confuse them for copperheads, but we don’t get many (or even any) copperheads in this part of Pennsyltucky. We do get snakes people think are copperheads, like milk snakes and water snakes, and then they flip out and behead them with shovels or dispatch them with rifles because people are unnaturally scared of snakes, even though snakes are amazing and do a lot of good pest control work that would cost you a lot of money if you asked a human being to do it. (Sneks don’t care about your capitalism, yo.)

Anyway, this little snakey-fella or snakey-lady was underneath the stone, and B-Dub was like, oooooh, and he wanted to get close and look at it. So we did, within reason, without spooking the thing too terribly much. I got off a pic and then gently replaced the rock.

Days later, we found its skin.

And B-Dub kept the skin in a jar that also contains about two dozen cicada skins and some dragonfly and butterfly wings, and if he were an adult it would look like the kind of thing a serial killer keeps, but it’s a pretty cool jar. You can rattle his creepy cicada jar and it makes a sound:

THE WHISPER-RASP OF DEAD FLESH.

Point of the story is, what? I dunno. Don’t be scared of snakes, I guess, because SNEKS BE COOL.

Also, though, there is a transformative element to a snake shedding its skin, and that leads me into the next question, where I ask you about THIS VERY BLOG.

The blog numbers here are waaaaay down.

This is not an exaggeration when I say November of last year (cough cough election time) came and went, and after it, my views went over a cliff. My purely anecdotal feeling on this is that it has less to do with what I’m posting and more to do with what’s going on in the world. People, to my delight, seem to be reading more actual articles and fewer ding-dong bloggers (cough cough like me), and given that humans only have so much reading time in them in a given day, one suspects that some more casual reading (cough cough terribleminds) may have fallen sacrifice to that. Plus, sometimes I’ll post something I think is cool, and ten minutes later, it’s all BREAKING NEWS: EL PRESIDENTE SEEN HIDING IN VLADIMIR PUTIN’S UNDERWEAR DRAWER or BREAKING NEWS: REPUBLICANS GATHER TOGETHER IN SECRET SORCEROUS CEREMONY TO SACRIFICE THE LAST UNICORN IN ORDER TO DISMANTLE THE FINAL SACRED PROTECTIVE LOCKS OF OBAMACARE, THUS DOOMING THEIR CONSTITUENTS TO WORSE AND MORE EXPENSIVE HEALTH CARE. Or just BREAKING NEWS: SHIT’S ON FIRE AGAIN. Eyeballs naturally flit toward the news, which these days is effectively a stock ticker that doesn’t track stock prices, but rather the highs and lows of our collective social anxieties.

So, it leaves me feeling like — well, what the hell do I do?

Seems I have a handful of options, and I’m happy to hear your thoughts on these, so feel free to swing your way down into the comments and add your two pennies:

a) Fuck it, blog less, turn this into a mostly promotional vehicle.

b) Fuck it, blog the same as I do now, because ultimately I don’t blog for eyeballs but because I cannot contain the stupid thoughts that exist inside my head so I might as well purge them here — even though I kinda pay a bit of a premium to host this sucker.

c) Turn it to a Patreon-kinda-gig.

e) SHUT IT ALL DOWN

f) I dunno, cat pictures or something, even though I don’t have a cat.

Admittedly, some of my reduced blog numbers are because subscriptions are strong — over 6k subscribing means those people don’t need to “hit” the blog everyday to see what’s here. And guest posts seem to be holding their numbers, which is nice. Still, I get the overall feeling that engagement here is lower, and that coincidentally happened right around November.

If you have thoughts, pop ’em below.