Good for you. Excellent. As John McClane said in Die Hard: “Welcome to the Party, pal.”

Here, then, is a list of quick advice nuggets. You may nibble on these and sample the many tastes. Some of this stuff I’ve said before, some of it is new-ish — whatever helps you, helps you. Whatever doesn’t, just wad it up and throw it into the nearest incinerator. Let’s begin.

1. You win when you finish the book. We set win conditions on writing a book in 30 days, and that’s cool. It is. But also, if you don’t, fuck it. The success is in finishing a first draft, whether that takes you 30 days or three months or three years.

2. This is the beachstorming draft. You’re just trying to get off the boat and up the sand without getting shot. This isn’t about perfection. It’s about survival. Survive to the end of the first draft and you deserve a cookie and a cold one. And by a “cold one” I mean chocolate milk. And by “chocolate milk” I mean a whole bottle of whiskey and by a cookie I mean an entire cheesecake.

3. Have a schedule. Seriously. If you’re going to try to hit a novel in 30 days, you’re better off setting a routine and sticking to it than trying to cram like it’s a high school history final. Slow and steady wins the race. Hitting 2k a day is not impossible, and it’s better than trying to evacuate your word bowels into a painful 10,000-word story-spree. That is how you prolapse your narrative anus. You know, between you and me, I regret ever writing the phrase “narrative anus,” but here we are. We came here together and we just have to deal with this now going forward.

4. Have a space. NaNoWriMo is effectively you taking on a full-time writing career in a very short span of time. One thing I can tell you, as I have told you before, is you need a space, and you need to vigorously defend it with tooth and claw and stabby quill. I don’t care if you’re writing on the toilet in the half-bath downstairs. I don’t care if you’ve chosen a quiet dumpster somewhere like you’re some strange mash-up of both Oscars (the Wilde and the Grouch). Pick a place and defend it. This is your home for thirty days.

5. The perfect is the enemy of the good. This is a vital truth in all creative acts. Tattoo it onto your eyeballs so you always see it. Hire somebody to whisper it into your ear.

6. Fuck impostor syndrome. Yes, you’re an impostor. We all are. This is a career of impostors. It’s okay. Embrace it. You don’t belong here. None of us belong here. That’s the awesome thing about a creative career — we’re all a bunch of stowaways and exiles.

7. Be aware of tracts of bumpy road. See them. Know when they’re coming. For me, I’m going to hit trouble writing a novel somewhere around the 33% mark and the 50% mark. I know a lot of newer writers, and this was true for me, had problems right at the start and then also around the middle. I dunno when they’ll be for you, but they’ll be there. The road will get bumpy. You just have to keep driving. Meaning, you just gotta keep writing. Put words on paper next to each other. One after the other, like footsteps.

9. Writing is not magic. It feels like it sometimes, and that’s rad. Other times it feels like raking leaves or running through quicksand. It is what it is and every day will be different. Don’t expect every day to feel the same. Don’t expect a good day to lead to good writing and a bad day to lead to bad writing. And don’t let it be magic. Magic is fickle. Let it be science: practiced, ritualized, with an outcome based on experience and effort and study. It can be magic again later.

10. The community is your friend. Other writers are great. I mean, really. In your genre and out, writers are — on a whole — lovely. You get a few peckers and jerkholes in there, but for the most part, when you feel like you’re falling, just whistle — the community will catch you.

11. The community is also your enemy. Writing is still an isolated thing. We can get lost in the community. We can take bad advice. We can compare ourselves to others. A bad pocket of community is as bad a pocket of poisonous air.

12. Have a plan. I don’t think outlines or other prep are an essential part of writing for everybody. I mean, they are for me, but I also find it necessary to drink coffee and dress up in a clown outfit and terrorize neighborhood children. That’s what gets my creative juices flowing. You gotta do you. However! NaNoWriMo is not necessarily a normal writing schedule. We’re talking an intense transitional effort. You’re going from ground to atmosphere as fast as you can, with yourself and your burgeoning novel strapped to a rickety-ass rocket. You may want to have a plan. That might mean an outline, sure. Or it might mean one of these 25 ways to plot and plan and scheme your novel.

13. Recharge your creative batteries. We have only so many IEP — Intellectual Energy Points — to spend in our day. And that tank is finite. You get some back from sleeping and eating. But you also have to take time to refill the coffers. Go for a walk. Read a book. Talk to other writers. Any activity that might jumpstart your UNICORN ENGINE, do it.

14. It’s not about getting published. Have your eye on the right goal — the goal is not publication, the goal is the writing and the finishing of that writing. Finish your shit.

15. Try not to read in the genre you’re writing. I find it confusing. I tend to accidentally start crossing wires — the book I’m reading might bleed into the book I’m writing. YMMV.

16. Have an idea. Like, an overarching idea. A theme. An argument. A thing that pisses you off or a thing about which you are passionate. Write it on a Post-It note. Stick the Post-It note to a 2×4. Bludgeon yourself about the head and neck with this 2×4 every day before writing.

17. Write down character traits and beats to keep in mind. Write down a few characteristics or emotional arc beats for different characters. Keep these notes visible. You can always use them as a lifeline to pull yourself through the narrative.

19. When in doubt, fuck shit up. Avoid comfort in fiction. If you start to feel stuck, make things worse for the characters. Someone makes a bad decision. Someone lies, or someone dies. Break something. Betrayals. Drama. A new threat. An evolved problem. It’s like a blender — you turn it up, then back down, then back up again. If the story has settled into a status quo, disrupt it. Create a new normal. Challenge the characters, advance the stakes.

22. Kill your editor. Er, not your actual editor? Like, the editor that lives inside your head. Now is not the time for the Critic. Now is the time for the Artist. Silence the Critic. Release the Artist. Again: you can always cut it later or fix it in post. Your book is not a stone monument. It is not a painting. It is a flowing stream. You can play with the flow as you go, again and again. You get as many drafts as you like. Reminder: please don’t actually kill anybody, kay, thanks.

23. Fuck the haters. Haters are a persistent presence in the universe. They’re the dark matter of humanity, spun up out of some sphincter-shaped black hole. People will hate on you for wanting to write, or not writing enough, or having the wrong process, or for daring to think you can do NaNoWriMo. Hate is like a dead bird around your neck. Throw it overboard and get back to your COOL CREATIVE BOAT JOURNEY.

24. Enjoy it. Or at least some part of it. Listen, this thing we do? This writey-writey story-making bullshit? It’s hard. And the rewards are often slow and minimal. Every day won’t be a fucking rain of happy balloon animals, and some days will be so tough and frustrating you want to literally bite your own hands off because of the crimes they have committed against narrative. Still — learn to enjoy it. Learn to find happiness — or even better, satisfaction — in it. Force a smile. Throw up jazz-hands. Roll around in it like a dog in the rotten paste of a dead squirrel.

25. Shut up and write. Wait till November 1st if you want. Or start now. Don’t talk about writing. Just write. Don’t get on Twitter or Tumblr to see how everyone else is doing. Just write. Write, write, write, then write some more. Write until you’re done.

Then have ice cream and a nap.

Or whiskey and a cheesecake.

Good luck. Have fun. Don’t chew your hands off.

So, starting now and through the end of November, use coupon code NANOWRIMO on my Gonzo Writing Book Bundle to nab eight of my writing e-books for 25% off the $20 price (so, $15). Or, if you want something in print: hey, look, The Kick-Ass Writer. 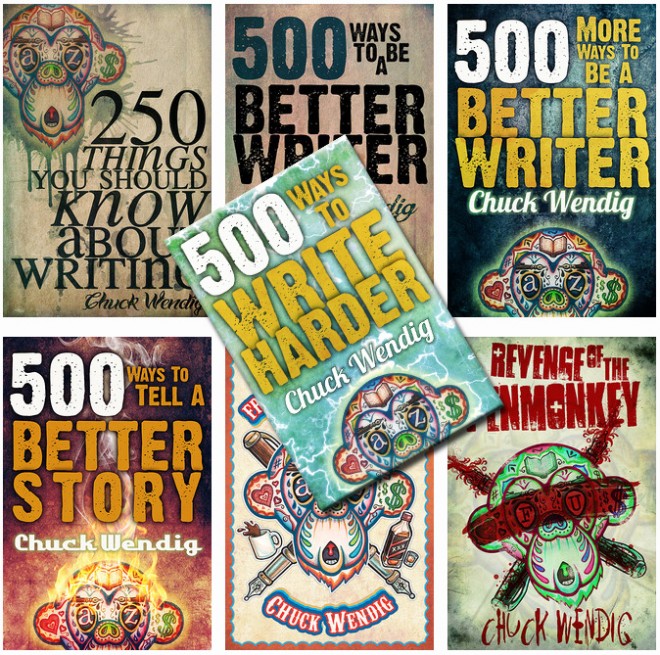