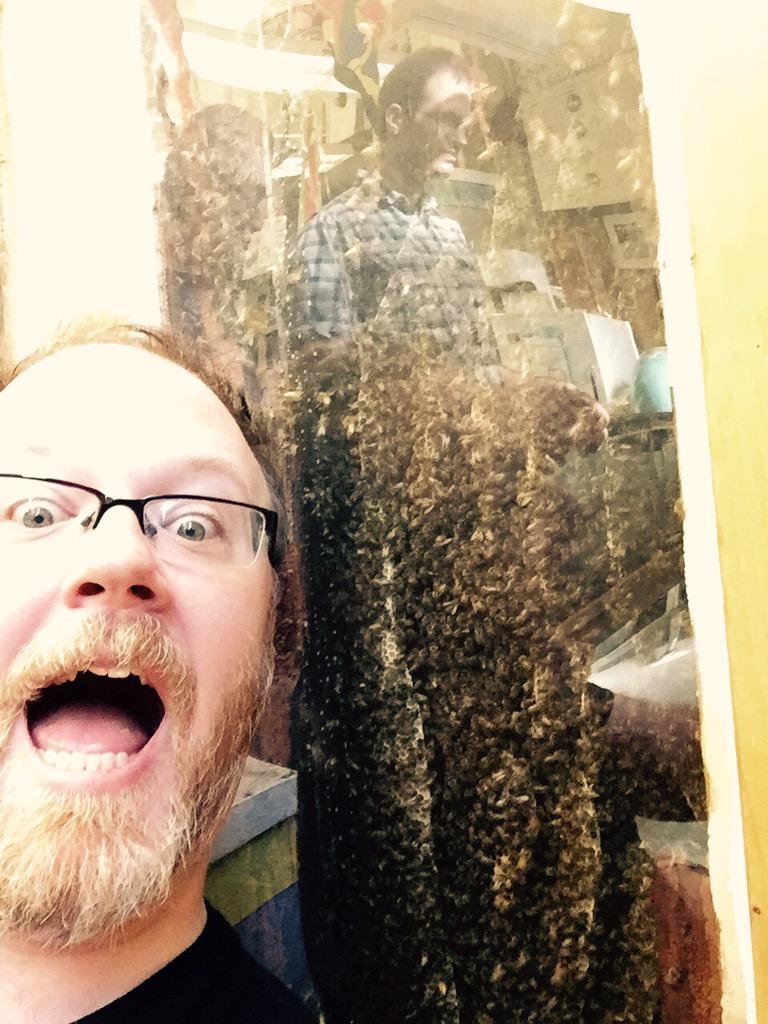 *slowly lowers you into the NEWS HIVE*

*where dancing, stinging NEWS BEES consumes your flesh and leaves you as bones*

I am back from the stinking heat pocket known as Indianapolis, fresh out of the whirlwind of games and writery stuff called the GenCon Writer’s Symposium. It was a wonderful time had by all (or at least me, for all I know the rest of them were miserable), whereupon I got to hang out on panels and bullshit about writing with other awesome writers. Many of whom are friends, too, and it’s great time and again to reconnect with other AUTHORIAL HUMANS to sort of share in troubles and triumphs and get your creative batteries recharged. These are Necessary Things.

Things I done did whilst there:

• Talked to writers of every level.

• Hung with writers I consider genuine pals — folks like Stephen Blackmoore, Delilah Dawson, Sam Sykes, Brian McClellan, Gwenda Bond, Kameron Hurley, JC Hutchins, Max Gladstone, Elizabeth Bear, and more — and got to meet writers I’d not yet met, too. Folks I admire, like Daryl Gregory. Or folks I’ve talked to for a long time but never actually encountered in the wild, like Elsa Henry. (And holy shit, Terry Brooks!) Or folks I just don’t see often enough like Scott Lynch, Jim Zub, John Hornor Jacobs, Maurice Broaddus. If talent were an obelisk, the size of said obelisk present at the Writer’s Symposium could’ve crushed a whole city had it toppled.

• Got to meet friends and fans I knew online but were not sure if they were just constructs of my imagination or not. Folks like Andrea Judy and Charlotte Moore!

• Three words: LIVE STORIUM GAME. Stephen Hood and Josh Whiting of Storium said to me, Dawson, Blackmoore, Sykes and McClellan, “Hey, you guys should play a live Storium game for the Worldbuilders Charity,” and we said, sure, sure, yeah, that totally won’t be a depraved drain-circle of sheer narrative perversity. We played a game that quickly descended into… something? Something that featured things like Assdazzler, Mooseknuckle, Brangelina, hammer dancing, Nickleback, ass bees, ecto-jizz, ecto-jazz, magical proctology, a vampire everybody ignored, Storg, Jamantha, Japertha, and so much more. We raised money. We ruined our careers. Glory be. Will that game ever be made public? Only the Storium gods truly know.

• Gwen Pearson of the Purdue Bug Barn said, “Hey, I’ll take anybody from GenCon who wants to go to hangout with me and a buncha bugs.” And so I said, “BUGGERY IT SHALL BE,” and then quickly revised that sentiment realizing what I’d just said. Me, Dawson, Blackmoore and Gladstone (the weirdest law firm ever) went and got a half-day lesson about ants, bees, beetles, spiders, caterpillars, millipedes, cloacal popping, phalloblasting, robots, dermestids, OBTs, ant-based thunderdomes, ants that smell like blue cheese, and more. I got to handle a tarantula named Rosie. It was actually awesome. She was gentle and slow and actually cute if you look at her up close. (Super derpy.) You may gaze upon my SPIDER DELIGHT here. Or you may take this present from Delilah, which is totally not a spider.

I probably did more shit, but there you go.

Thank you to Marc Tassin for putting it all together!

Let’s say you wanted to pre-order Zer0es, my “hackers go against a self-aware NSA surveillance program” novel which is hopefully a lot of scary, thrillery fun.

Let’s say you wanted to pre-order but then get SOMETHING EXTRA for your troubles.

Pre-order either the hardcover or e-book edition from anywhere at all, and you can get the first two chapters of my next Harper sci-fi thriller, a novel I call Myrmidon, about an FBI futurist named Hannah Stander investigating a dead body in a cabin in upstate New York.

The link for the pre-order page (where you enter in your pre-order info!) is right here.

Pre-ordering is an awesome thing that tells booksellers how much to order and if the book has buzz. Plus, you buying a book like Zer0es lets me keep on writing other books and also running the blog. So if you’re one of those people who tells me you read this blog but have never read my books, now’s a good time to start, because hosting this sucker ain’t cheap. (/guiltprod)

You can preorder from:

(Or, of course, from Powells or a local bookseller found via Indiebound.)

Amazon listed the book as one of the best books of August!

Let’s also say you’re all like, “MAN, I really wish I had some of that book to read right now.”

That, too, shall be done.

In fact, you can read the first four chapters right now.

And, if enough folks click that link and spread it around, a fifth chapter will be revealed.

IT WILL BE UPLOADED STRAIGHT TO YOUR BRAIN VIA A LOUD, SHRILL MONOTONE —

I was very fortunate to be invited onto Paul Cornell’s newest podcast endeavor, The Cornell Collective! A delightful time was had as I joined Leah Moore and Christel Dee. Go listen!

The second Miriam Black book, Mockingbird, is now only $1.99 for the month of August.

So, you know what to do.

KILL IN MY NAME.

Some folks correctly noticed that I wasn’t approving unmoderated comments at the blog over the weekend while I was at GenCon. I had minimal access to Internet and for some reason my phone doesn’t always like me to administrate big chunks of bloggage on the fly. The iPad is better but I couldn’t get it to any meaningful wi-fi for that purpose. Apologies!

Comments released from their cages, now.