Listen, This Is A Fox Blog Now, I Don’t Make The Rules

The foxes, they’re still here. They dig holes. They race around our forest and our yard like they found some hollow stump cache of elf cocaine. They chew on a dog toy they found. They left me a glove as a present. And they kill things, as is their way, as is the way of all nature, I suppose: red in tooth and claw. The other day one of the fox parents came back with a lump of something dead in its mouth, and when I looked back at the pictures I saw some Watership Down shit going on —

The parents have begun taking the kits out, one by one, into the forest — I assume to teach them to hunt. Though the kits can already do some of that on their own — a kit brought back its own baby bunny, too. And I see them chasing bugs from time to time. They play with one another, doing these tremendous mouse pounces from considerable heights (a log on an angle, three feet up, gives them ample rad stunt jumps). They hide and stalk and gambol about. It’s fun to watch. They’re most active at dusk and dawn, but usually once or twice in the middle of the day they come out — and they often do so now right in front of the shed. Where they scratch at the door to be let in —

AND YES I WANT THEM TO COME IN.

I WANT TO BE THEIR WEIRD FOREST UNCLE.

But I don’t because they need to be a little bit afraid of me.

It does mean, though, I get lots of cool videos — the Twitter feed is ongoing, but you can see one such video here. It’s amazing to watch. And the other amazing thing is how close fox families (“skulks”) really are. Foxes are good parents! They attend to their kits and play with them, they let the kits crawl all of them, they teach them, they bring them toys (!!) — seriously, they do. And the kits really get along, too. Eventually, the great sadness is that the family will split up by fall, and the kits will go their way, and I believe are unlikely to see one another or the parents again. The parents, though, I am told mate for life, so will live solitary until next breeding season. When they come together for some good ol’-fashioned fox fornicatin’.

Anyway. More photos at the bottom!

In the meantime, some more newsy-bits —

Soon, I travel. Here’s a purty graphic as to where I’ll be traveling for Wanderers, though note it doesn’t include appearances like BookCon, KGB Bar Fantastic Fiction, DFWCon, or SDCC. This is bookstore only! 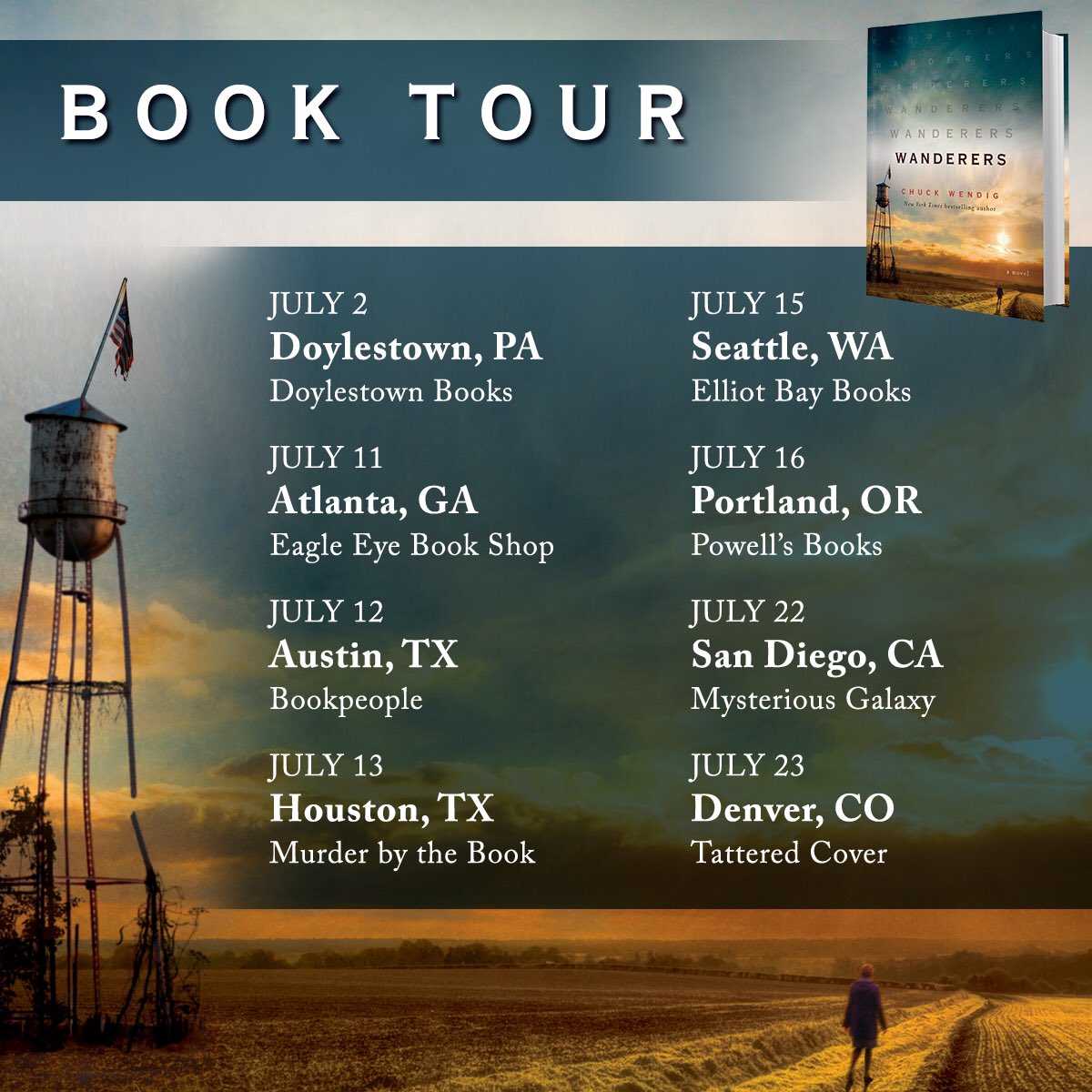 Now, to answer the inevitable question — why are you not coming to my city?

That is a multi-tiered answer.

First, I regrettably only have so much time! I gotta get home at some point to see my family, and of course I mean THE FOXES shut up don’t judge me.

Second, I didn’t actually put this together — Del Rey put this together based on solicitations from the stores themselves for the most part. So, the stores say, “We want Chuck,” or, “Our patrons want him,” and they tell Del Rey. If you want me at your store, definitely check with the store and see if they can generate that interest.

Third, the locations also have some relevance to Wanderers, actually… no spoilers, but. Yeah.

Fourth, I may do a second leg in the early fall? East Coast and maybe like, Chicago. Not sure, yet, if it’ll make sense, but it’s something I’m seeing if I can swing. Keep an eye on this space, because of course this is where I’ll announce it, if I do.

Also don’t forget, even if you’re not near these stores, they can and will ship copies. Signed or no.

More as I have it!

And now, MORE FOXES. (Or check out the whole Flickr album.)