Assorted Thoughts On Impostor Syndrome, Gathered In A Bouquet 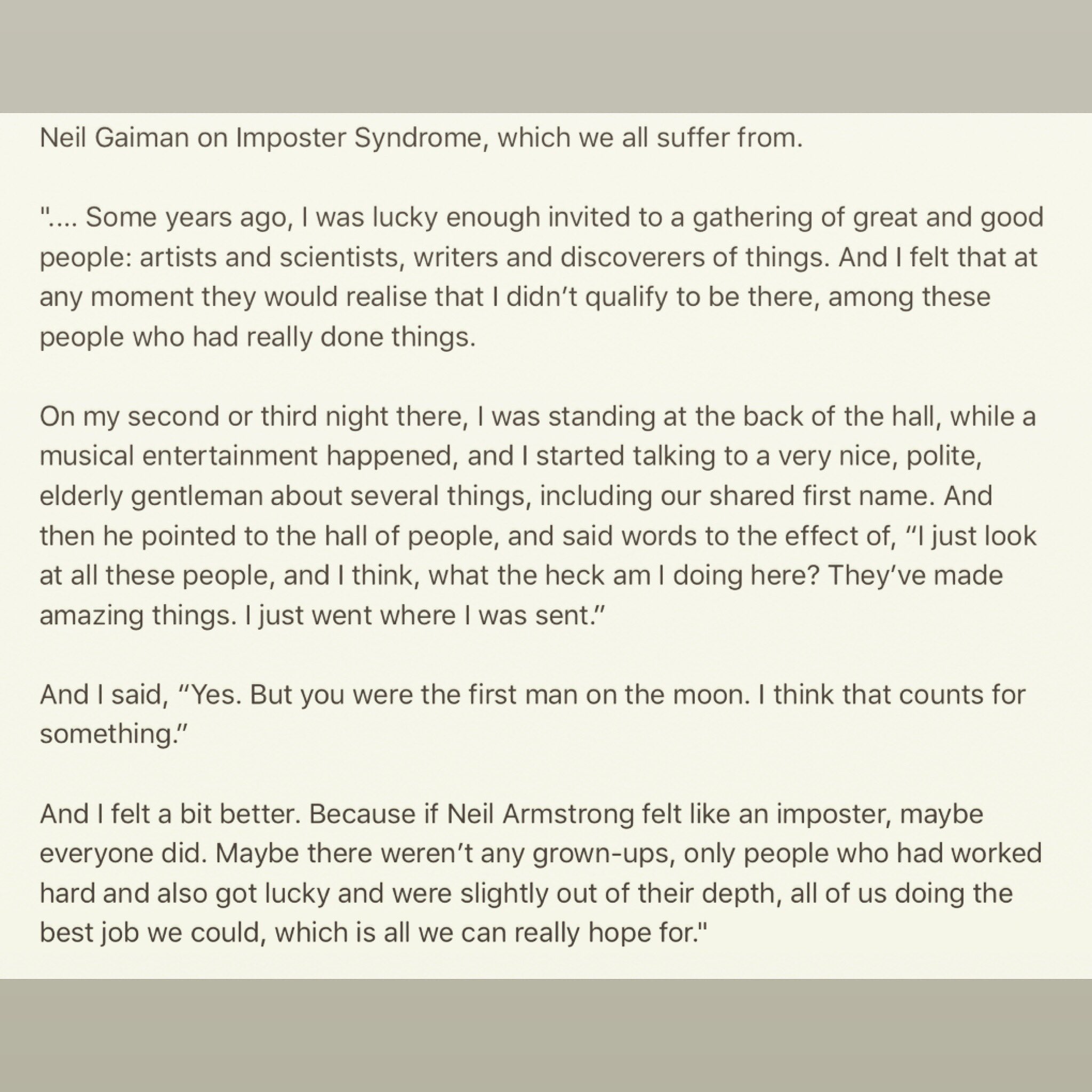 So, a few weeks back I did a couple threads on impostor syndrome, which is a very common thing that writers of all experience and comfort levels seem to experience — I certainly do, and you probably do, too. If you don’t, you might be a monster, maybe some kind of Yeti, so get that checked out. I figured I should grab these tweets and pop them somewhere, like, say, at this little blog, to share with those who maybe missed the threads on Twitter when they first appeared.

This is two separate threads, broken out by asterisks.

And asterisks, as you know, are also Cat Butthole Emoji. So, look for the trio of ASCII cat poopers, and you know when the next thread is beginning.

[Note: I’m not using Storify for these anymore because Storify is going away.]

I will now tell my own impostor syndrome story, as it relates to @neilhimself.

So, two years ago, I had the distinct pleasure of getting to speak in NYC as part of @MargaretAtwood‘s birthday event at the 92Y.

I was one of the speakers alongside a set of luminaries like @leverus, @erinmorgenstern, and @neilhimself — in the presence of @MargaretAtwood herself.

Already I was going to the event with the utter certainty I didn’t belong there. I felt like a shadow on an X-Ray, a notable stain on an otherwise beautiful skeleton.

When I got there, arriving a bit early for the event, I went into the green room and I was alone.

Except for Neil Gaiman.

Neil Fucking Gaiman. Good Omens! Sandman! The Ocean at the End of the Lane! Stardust and Coraline and American Gods and Neverwhere and…

(C’mon. Dark poet, elegantly mussed hair, you know him, you love him.)

And I stood there for a moment, utterly frozen. He was, if I recall, looking at his phone.

Because I thought, I should leave him alone! I don’t belong here. THIS IS RARE AIR AND I DO NOT DESERVE TO BREATHE IT.

And then he Tasered me and called security.

He smiled warmly and invited me in and was friendly and delightful and made me feel like I belonged. The other authors welcomed me too and it was awesome, even if I (even now!) still feel like a stowaway on that boat.

As writers we so often have the feeling like we are a Scooby-Doo monster about to be unmasked. I don’t think you ever really lose that.

BUT — and here is a vital part of the lesson — you can help diminish that feeling in other writers by making them feel welcome and a part of the tribe.

Recognize other writers feel like impostors too — and you can combat the feeling in yourself by helping them combat it when you welcome them. In this, community blooms.

You’ll never lose it. But you can help others feel like they belong. And when community grows you feel less alone.

At whatever level you are, other authors are likely to feel isolated and impostor-ish. You aren’t alone. And you can help them not be alone, too. Thanks to @neilhimself for doing exactly that for me, that day. @leverus, @erinmorgenstern and obviously @MargaretAtwood, too.

Can we talk a little [more] about impostor syndrome? Let’s talk about it. More specifically, let me tell you how I — well, it’s not how I defeat it, but rather, how I lean into it.

DOCTOR PENMONKEY: HOW I LEARNED TO STOP WORRYING AND LEARN TO LOVE THE IMPOSTOR SYNDROME. Or something.

(This is a follow up somewhat to last week’s thread, which talked about the value of community in regulating impostor syndrome in others and, by proxy, in yourself.)

So, the facts on the ground are, blah blah blah, impostor syndrome is bullshit, but most (all?) writers suffer from it regularly, you’re not alone, it’s totally normal, and so on and so forth.

A lot of advice goes toward how you stop feeling it, which is not always helpful because — ennnh, you’re gonna keep feeling it. You just are.

Maybe you’ll experience it with less regularity, but it’ll be there. It’s like a ghost. You thought you got rid of the ghost but then you go to shower and BOO, the ghost is there, and you pee yourself a little, because ghost.

For me, writing is two things: it’s DOING THE WORK plus MITIGATING MY MINDSET. The first part is sitting down and gnawing your keyboard until words come out.

The second part is all in my head. And it’s a heady, gurgling broth of mental adjustment, from managing expectations to punching self-doubt in the kidneys to not comparing myself to others to not second-guessing myself and the book every 13 minutes, and so forth.

Part of the thorny tangle of my authorial brain-briar is the snarling snare of impostor’s syndrome. You feel like you don’t belong, as if at any moment someone will unmask you like a Scooby-Doo villain. AND I WOULD’VE GOTTEN AWAY WITH IT IF IT WASN’T FOR YOU MEDDLING BRAIN WEASELS

And yes, I used the Scooby-Doo metaphor in the above thread, but I like it, and I’m keeping it, so.

I learn to embrace the joy of the forbidden.

What I mean is this: impostor syndrome wants you to feel like a new kid in class, and every moment of your career feels like you entering the classroom and going to sit down at a faraway desk as everyone stares at you, The New Kid.

But there’s a different version if it, where you experience an illicit thrill of being somewhere you’re explicitly not supposed to be.

It’s like sneaking backstage at a concert. Or hanging out in your high school after hours, after everything is shut and everyone is gone. Or getting a tour of the chocolate factory OOPS one of the kids fell into the drink ha ha ha that’s okay she’s chocolate now, it’s fine.

There are a few real-world analogs to this I’ve experienced — in Hawaii, I’ve been to places where you’re not supposed to go, off-the-beaten-path, and you can see some truly delirious waterfalls, beaches, cliffs, if you do.

Or, having crashed a party or an event you weren’t invited to? Suddenly you’re shoveling down fancy horse-doovers and pretending like you’re supposed to be there.

Recently I got to sit in First Class for the first time, and it was like, exciting because I knew I didn’t belong there. I was like HA HA FUCK YOU I AM DRINKING SCOTCH BEFORE WE TAKE OFF AT 11AM THAT’S RIGHT, I’M A FLY IN YOUR MILK, RICH PEOPLE

I SEE YOU LOOKING AT ME, GUY IN THE THIRD ROW. IT’S ME, THE BARBARIAN IN ROW 4, BUDDY. HUGS AND KISSES, GUY-WHO-IS-PROBABLY-A-CEO. HA HA HA SUCK IT

And it’s that “ha ha ha suck it” that feels so good about being somewhere you’re not supposed to be. There is a great deal of freedom, in fact, in that.

Being the barbarian at the gate comes with a great deal of reduced responsibility. Because you’re breaking the rules. You’ve changed the game. You’re not supposed to be here…

Impostor Syndrome can either be you, The New Kid, nervous about not belonging. Or it can be you, the Party-Crasher, joyfully gobbling down fancy foods and enjoying the anarchy of your uninvited presence.

32 responses to “Assorted Thoughts On Impostor Syndrome, Gathered In A Bouquet”