Not Being Inclusive Is Also A Political Choice

Gonna try to keep this short and tight, like a hobbit sock.

[Edit: I fear I have failed to keep it short and tight, like a hobbit sock.]

As you well know, I WROTE A STAR WAR, and in fact, I wrote THREE STARS WAR, plus a STARS WAR SHORT STORY and a WAR STAR BOOK OF COMICS and it’s been pretty great except for the fact that sometimes I get some, ahem, interesting reviews, tweets, and emails.

Last week, a wonderful hashtag spun around the Twitters — #SWRepMatters — which is to say, Star Wars Representation Matters. Go read the tweets that line up behind it.

Someone responded to one of my tweets and said the following: 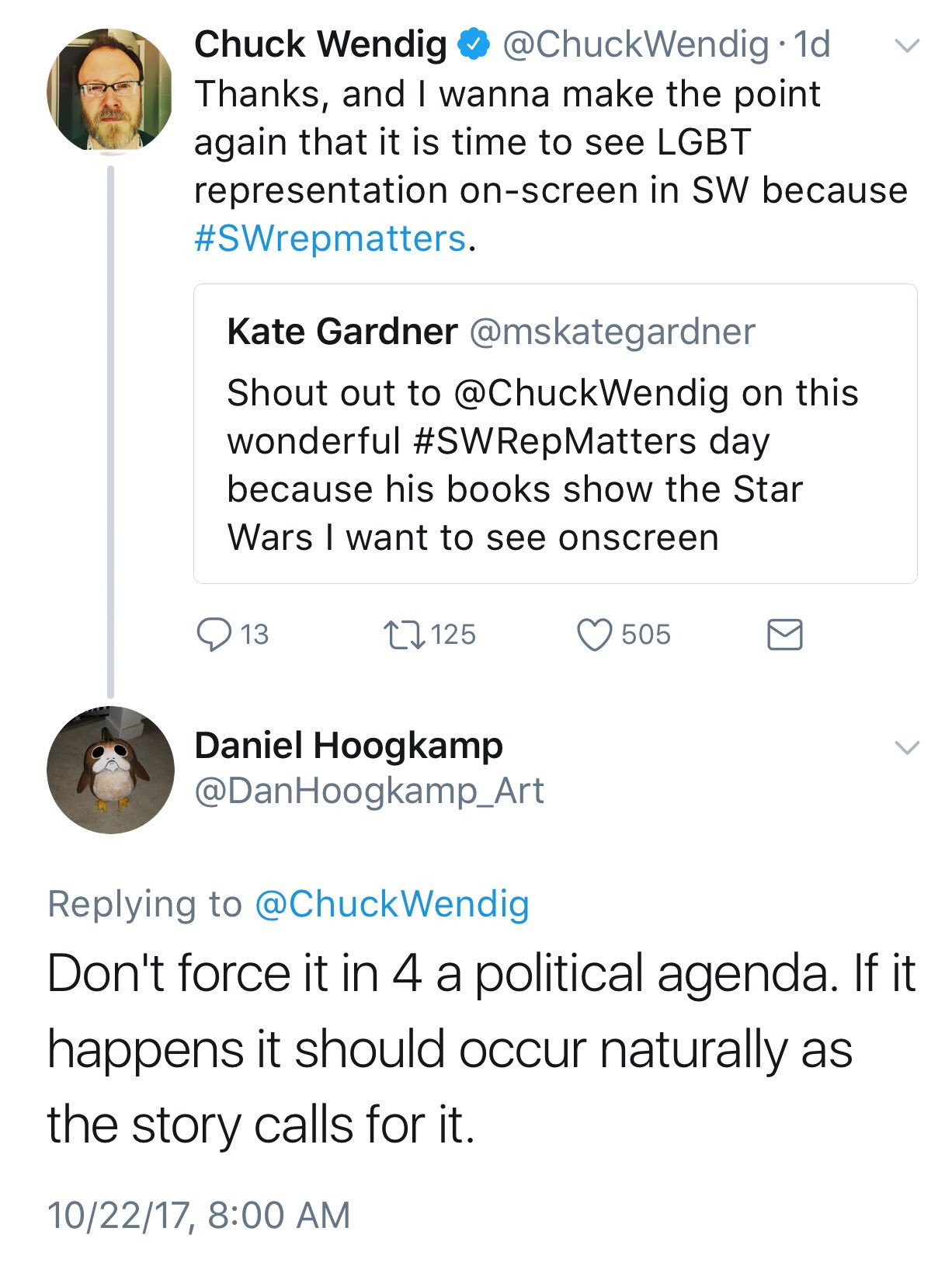 1. everything is forced in a story because they’re not magic

2. stories are not a natural state and so nothing occurs naturally within them, nor can they “call for” anything

3. inclusivity is part of good storytelling

4. not being inclusive is also a political choice

This person deleted his tweet and went on to clarify that he in fact totally supported a pairing like, say, Finn/Poe, but he wanted it to have a purpose in the story and not simply be included for political purposes. Abstractly, what he’s saying is, he’s not a bigot, not a homophobe, he just cares about storytelling. Which is fine, in theory, and I’m not suggesting this person is worthy of excoriation. I’m sure he means well. But I think it’s really worth shining a big, bright-ass light on this, because I think there’s a soft, unacknowledged prejudice at work.

It assumes that there exists a default in storytelling — and that default is one way, and not the other. The default is straight relationships, or cisgendered characters, or able-bodied white dudes, or whatever. One of the criticisms Aftermath received was this very special kind of softball phobia, right? “I don’t mind LGBT characters, but these were forced into the narrative for a political agenda,” assuming that the characters are somehow not characters at all, but rather protest signs or billboards advertising THE WONDERS OF GAYNESS or THE FABULOSITY OF THE NON-BINARY SPACE PIRATE LIFE. The complaint then becomes that these characters are political levers, identified as such because their natures (be it LGBT characters like Sinjir Rath Velus and Eleodie Maracavanya, or a character of color like Admiral Rae Sloane, or women characters like Norra Wexley and Jas Emari) do not somehow factor into the plot. Like, Sinjir’s homosexuality is not a plot point. He doesn’t shoot gayness out of his eyes to blow up the Third Death Star, oh no, he’s only there as a commercial for GAY PEOPLE EXISTING.

And the defense these critics make is that, “Well, Anakin and Padme’s relationship is plot-entangled, because their heterosexual coupling yields children of destiny.” So too with Han and Leia. (Erm, less so with Luke and Leia, unless we are to believe Rey is the child of incest, and boy, wouldn’t that be a twist?) Basically, Anakin and Padme do blow up the Death Star with their heterosexual coupling by proxy, because their two children literally work together to do just that very thing.

Problem is, that’s a shitty defense for a lot of reasons, first because it assumes characters are on the page only to serve plot, rather than to be on the page creating plot with their wants, their needs, their problems, their fears. Characters are who they are, and are not all driven by some kind of mythic quest — it’s okay that they want love, or respect, or are the products of their history and circumstance. It’s also a shitty defense because it assumes that the existence of a relationship is not itself plot — even if two characters have an untroubled relationship and exist together, they’re still making choices based on that relationship. Sinjir and Conder have a relationship in Aftermath, and it literally affects Sinjir’s character arc. It changes who he is. Each character has gravity and affects the other accordingly. Which in turn means they make decisions based on this, and those decisions do not follow the plot — they become the plot. So, the characters actually do affect the plot with their relationship.

But so fucking what if they didn’t?

So what if they’re just… together? And it affects nothing? So what if they’re simply visible examples of LGBT characters in a relationship? Who gives a shit? (Answer: a lot of turd-people, admittedly.) So what if The Doctor is now a woman, or James Bond ends up being played by a black actor? Someone says, “WUH, PFFT, WELL, THAT’S JUST SERVING A POLITICAL AGENDA, THEN.” Except, I got bad news for you: not including LGBT characters is similarly a political choice. Same as it is to not include disabled characters, or characters of color, or women, or, or, or. You just don’t see it as a political choice because it’s the politics in which you already swim. Like a fish, you have no context for the water all around you because it is your automatic default. If you view the presence of these characters as being political in the story, then you likely view them in reality — in your really real life! — as similarly political.

As I said above, stories aren’t alive. Yes, we tell tales ideally in an organic way so that all the widgets and flywheels in the mechanics are hidden from view, and yes, sometimes it feels like the stories somehow “flow” from us, as if we are simply summoning Cosmic Creative Energy, but the truth is, none of this is natural. Believing anything to be natural about stories allows us to create uncomfortable crutches for the stories we tell. Storytellers are engines of creation, not conduits for it. We force them into being. We conjure pyroclasm and lightning to tell tales. We make deliberate choices in our narrative — and, if you don’t make those deliberate choices, then you’re likely relying on lazy tropes or outmoded prejudices to tell those stories. A lack of inclusion in narrative is one such choice — based on lazy tropes and outmoded prejudices, it’s a choice that refuses to acknowledge actual people and actual reality.

None of that is an excuse, by the way, to make the opposite choice lazily — it’s entirely worth seeing the line where inclusion stumbles into a host of other problems (white savior stories, appropriating narratives that are not yours to tell, injecting such inclusion with other shitty tropes), but that’s a reason to do it and try to get it right rather than simply not to do it at all. Because it bears repeating: not being inclusive in the work is a political choice. Stories are not real. We tell them. We make them up. We will them into being with our fucking minds.

It’s up to us to make them right and to tell them to the widest audience we can reach. Further, it’s also up to us to help support inclusivity outside the stories and among storytellers — inclusion shouldn’t just be on the page or the screen, but also behind the camera, behind the executive desk, behind the editorial and authorial pen. We have a lot of work to do, and choosing not to do it is no longer acceptable.

61 responses to “Not Being Inclusive Is Also A Political Choice”