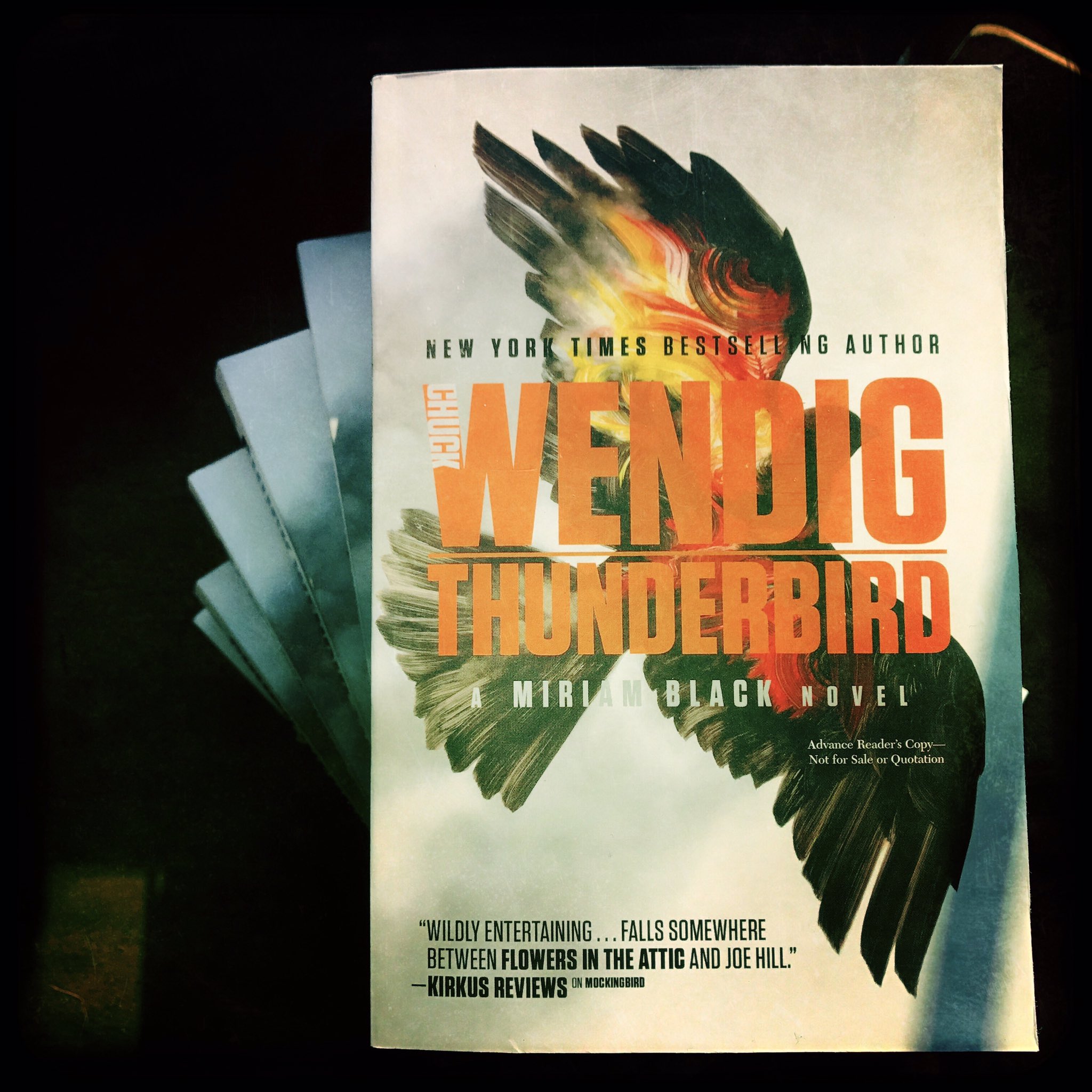 Well, by the mercy of Sweet Saint Fuck, here we are.

Let’s just go through the journey, shall we?

It took me five years to write Blackbirds. Or, more to the point, it took me five years to learn how to write Blackbirds. I’d written five novels before that, but this one was different. I was into it, but not getting it. A mentorship with a bad-ass dude (salute to Stephen Susco) taught me to outline, to frame it out, and then there it was: a book.

Got an agent very quickly, bing. (*waves to Stacia*)

Got a publishing deal um, not immediately. Was another two years, I think, before the book hit shelves — so, by then, you’re looking at a seven year situation for one goddamn book, and as I am wont to say to new writers: it takes the time that it takes.

Blackbirds, about a very cantankerous, cynical young woman who can see how you’re going to die just by touching you, came out in April 2012, right around my birthday.

Though I wasn’t able to announce it, we had a TV option cooking from literally the day the book came out — when the book came out, I was out in Los Angeles for the LA Book Fest (and I’m back this year, bee-tee-dubs) taking meetings on the book.

I wrote Mockingbird in 30 days. (I’ve seen some snark about how haw haw he writes fast and that’s proof Wendig sucks, but hey, fuck you. Like I said: it takes the time that it takes. And that 30 days wasn’t like, BOOM I WROTE A BOOK IN ONE MONTH, NOW TO IMMEDIATELY CATAPULT IT ONTO A BOOK SHELF — it took additional time in revisions and copy-edits.) Mockingbird, which took Miriam into the heart of a serial killer’s madness and that killer’s predations on a local girls’ private school, debuted also in 2012, about four months after the first book.

The Cormorant, which saw Miriam going up against a returning enemy — who had been upgraded with psychic powers all his own — also had her confront her past in the form of her mother. The Cormorant came out in late 2013, and honestly is maybe my favorite book that I’ve ever written. I actually freaked myself out writing the ending, and loved every moment of it.

Now, here’s where the journey gets interesting.

First, we had a TV show with Starz — and then we didn’t. It was going really well. We had locations and offices and staff and we were talking casting and then we weren’t talking casting and then nothing. That’s the business, them’s the deals, no harm, no foul. (Honestly, I think this timed out with Starz picking up Gaiman’s American Gods. On paper, both books are dark urban fantasy about troubled anti-heroes. And if I had the choice to make a Miriam TV show or an American Gods TV show, I’d make the Gaiman show in the hair’s breadth of a heartbeat.)

Second, we were able to rescue the rights to Miriam from the original publisher, Angry Robot, and then were able to resell them to SAGA, an imprint of S&S, under editor Joe Monti.

Which is further to say, I wrote the book two years ago.

That only struck me recently — way time and memory move, I didn’t realize there had been quite that much time in between the finishing-of-the-book and the publishing-of-the-book. Part of the delayed publication was in part to give a staggered re-release to the first three books, all with new covers. (I, too, miss the Joey Hi-Fi covers, by the way, but the one issue I had with those covers is that on bookshelves it was hard to distinguish between the separate books. And the original publisher didn’t put a series number, so a lot of people read the series out of order because they just didn’t know. The new Adam Doyle covers are dynamic and rad, and put a cool focus on the, ahem, bird component of the story.) Also, the goal was to put the final three books closer together in publication — not one a year so much as one every 6 months or so.

So, two years (!) ago I wrote Thunderbird, and then moved into writing a novella, Interlude: Swallow, which takes place after The Cormorant and before Thunderbird, so it’s something of a bridging story. You can find that, by the way, in the Three Slices anthology, which is a rad project I did with FELLOW PENMONKEY PALS Kevin Hearne and Delilah Dawson. (You’ll also find some Miriam storyworld mythology inside The Forever Endeavor, fyi.)

Then there was the Miriam Black video game, where you literally had to mash buttons in order to drink and smoke and curse at people as you watch them die.

Okay, that might’ve just been a weird dream. No video game.

Meanwhile, I wrote The Raptor & The Wren (out… I think by the end of this year?) and am currently writing the last (gasp!) Miriam novel, Vultures.

And now, here we are.

It is the day.

Miriam Black is back.

Obviously, I hope you’ll check it out. It’s the next stop on what has for me been a long, fascinating, and sometimes circuitous journey. Miriam is — well, Miriam is the product of a broken world full of broken people. Nobody is good. Everybody is just shades of bad. It’s a book that’s about mortality and frailty, but it’s also a book that enrobes a tiny little pilot light inside a deep dark pit. And yet, I don’t aim for the books to be bleak, either — despite all the darkness, I like to think they’re exciting and fun and funny even as they are ideally very very fucked up. I’m sometimes asked what genre these books are — I wrote them as horror-crime, they got initially branded as urban fantasy, and are presently called supernatural thrillers. I’m good with any of those, I suppose. Genre is a floating target. Either way, no matter where they fall, I hope you read them, I hope you like them, and I hope Miriam peck-peck-pecks her way into your heart as she has mine. Now, I just have to extract these angry ravens from my chest cavity.

“Despite a few years away from the series due to a change in publishers, it takes no time to feel right at home with Miriam again. Wendig slams down the accelerator on page one, and never lets up for a moment. His frenetic, shotgun style of prose is a trademark, and nowhere does it hit with as much force, drive, emotion, and explosiveness than when deployed in service to Miriam Black. His descriptions of her inner turmoil—should she get rid of her powers, when they are all she can rely on to uncover the coup—are among the best moments in the book, and truly show the growth this once-broken drifter has experienced since we first met her. Her pain is our pain and her fears are our fears as she puts her hopes on the line again and again to save a young kid who may hold in his grasp a terrifying ability. Wendig surrounds his dark knight with a cast of luridly colorful, broken, vicious, and powered people, especially the woman of the hour, Mary Scissors, whose true powers and motives are something horrifying to behold.”

“This gritty, full-throttle series is what urban fantasy is all about, with bitter humor rounding out lyrical writing. It’s easy to root for this mouthy, rude, insensitive, but innately good young woman, and her story hits the reader like a double shot of rotgut.”

“Once again, Wendig finds a way to blend startlingly powerful descriptions and deep emotional gravity into a gritty, cynical narrative. The action comes fast in this fourth Miriam Black novel and the pace is relentless, but Wendig has control, carefully building his heroine and her world with each chapter in a way that is fascinating and thoroughly entertaining. New readers will have a good deal of catching up to do here, but for those who have followed Miriam’s remarkable adventures to date, the chance to watch her character, and her personal relationships, grow ever deeper and more complicated should not be passed up. A final, utterly devious premonition is sure to leave readers feverish for further installments of this haunting and ever-entertaining series.”