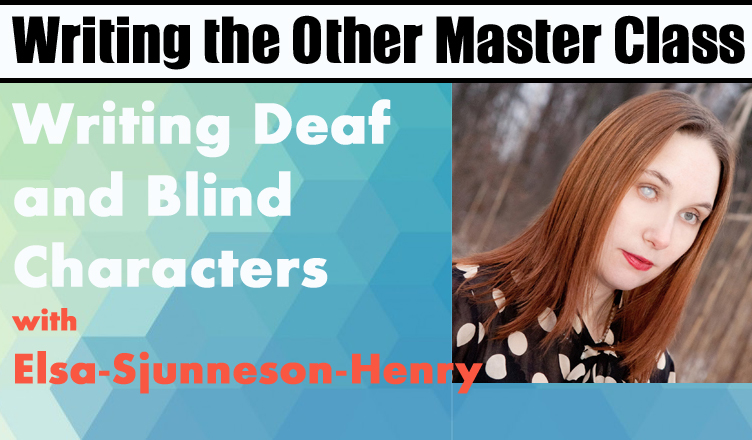 Elsa S. Henry returns to terribleminds (when last we saw her, she wrote the vital “So, You Wanna Write A Blind Character?” — she’s now going to teach a class on the subject of representing disability in fiction. Would you like to hear more? You should.

Six years ago in graduate school was when I realized that my identity as a disabled person mattered, whether I wanted it to or not. There’s something really scary about sitting in a room with a bunch of your peers, and suddenly realizing that they’ve made assumptions about whether or not you can have children all because you’re deaf and blind.

Six years ago was when I transformed from a person with a disability to a disabled person. For me, that shift meant that I stopped distancing myself from the body I was born in, and gave voice to a whole list of frustrations I’d been telling myself didn’t matter.

I’d been telling myself for my whole life that my disabilities didn’t shape me, or my life. That people didn’t give a fuck whether or not I could see – but the truth was, they did, and they still do.

Which is why I started speaking out about why representation matters. It doesn’t just matter because my feelings get hurt, it matters because the world around me judges me based on what they see about disabled people out there in the media.

When George Takei posts a meme joking about how a wheelchair user stood up and could reach for alcohol because that was “a miracle,” that reinforces that wheelchairs are only for people who can never stand up. (Link: http://rampyourvoice.com/2014/08/19/the-george-takei-disabled-meme-controversy-the-offense-response-public-apology/)

When Daredevil throws his cane away in an alley, it reinforces the fact that people with disabilities are faking.

When I flinch because someone grabs my arm and asks me if I need help while they’re moving me in the opposite direction from my goal- well, they learned that because the media tells them that blind people always need their help.

I’m the kind of person who wants to fix things, so when i realized that I had the skills to fix some of the problems that I see out there, I started writing. I started speaking. I started pitching books and articles, and asking people to listen to me.

And not everyone was happy about it.

I’ve gotten threats through email and harassment on twitter, all because I’m just saying we should have better representation of blind people. Just because I don’t think it’s useful to only represent tropes of disability as the only disability representations out there.

A few months back I went on a bit of a rage spiral about how an able bodied person was teaching a class about how to write disabled characters. I basically threw down the gauntlet, and I said I wanted to teach. And boy, I should always think about what I put out into the universe because I got plenty of teaching offers. Including the one coming up next month.

I’m teaching a Master Class on deaf and blind characters for Writing the Other.

You should come. It’ll be great.

It’ll be great because I’m deeply invested in changing the way that people write about disabled characters, the way that we develop a fictional world matters. Because science fiction and speculative fiction aren’t just reflections of the world we already live in, they’re reflections of the world we want to build, the place we want to claim as our own in the future. If we keep writing stories and futures where we don’t include disabled people, then disabled people will continue to be invisible, until someone decides we don’t exist anymore.

Dystopian futures don’t include us, even though our stories would be fascinating to tell. Cyberpunk futures erase our bodies, claiming that to be augmented is better than anythng. Erasing disability from your future doesn’t just suggest that we won’t matter in the future, it suggests that we won’t exist.

I don’t want to live in a world where I have no claim to my body, or to the identities which have shaped me.

My disabled identity only came to me six years ago, but now that it is a part of me, I know I could never give it up without a fight.

Claiming crip (Link: http://www.rootedinrights.org/claiming-crip-to-reclaim-identity/)  gave me more than just an identity that meshed with my experience of the world – a place where I have been denied opportunities on the basis of my disability, a world where I have literally been blamed for the bad things that have happened to me because I am blind. Claiming crip gave me a place where others would lift me up for being who I am, and for inhabiting the body that I have.

When I teach Writing the Other, I’ll be giving able bodied writers a glimpse into the world of disability, a chance to understand what it means to make choices based on the body you own, not just the one you might rent in a cyberpunk future.

I promise I don’t bite. But I do want to give you an education. One that’ll change the way you look at disability, from heroes to people. From overcoming narratives to living. From wheelchair bound, to valuing the chair as an equalizer.

So join me on September 10th.

Elsa Sjunneson-Henry is a half-blind, half-deaf, half-Scandinavian writer who haunts New Jersey. She’s worked on tabetop RPG books, been in fiction anthologies (check out Ghost in the Cogs from Broken Eye Books), and has written a number of nonfiction articles about disability. You can find those floating around on the internet. She can be found on twitter @snarkbat and at feministsonar.com. When she’s not frantically scribbling, she can be found singing Hamilton lyrics to her hound dog.