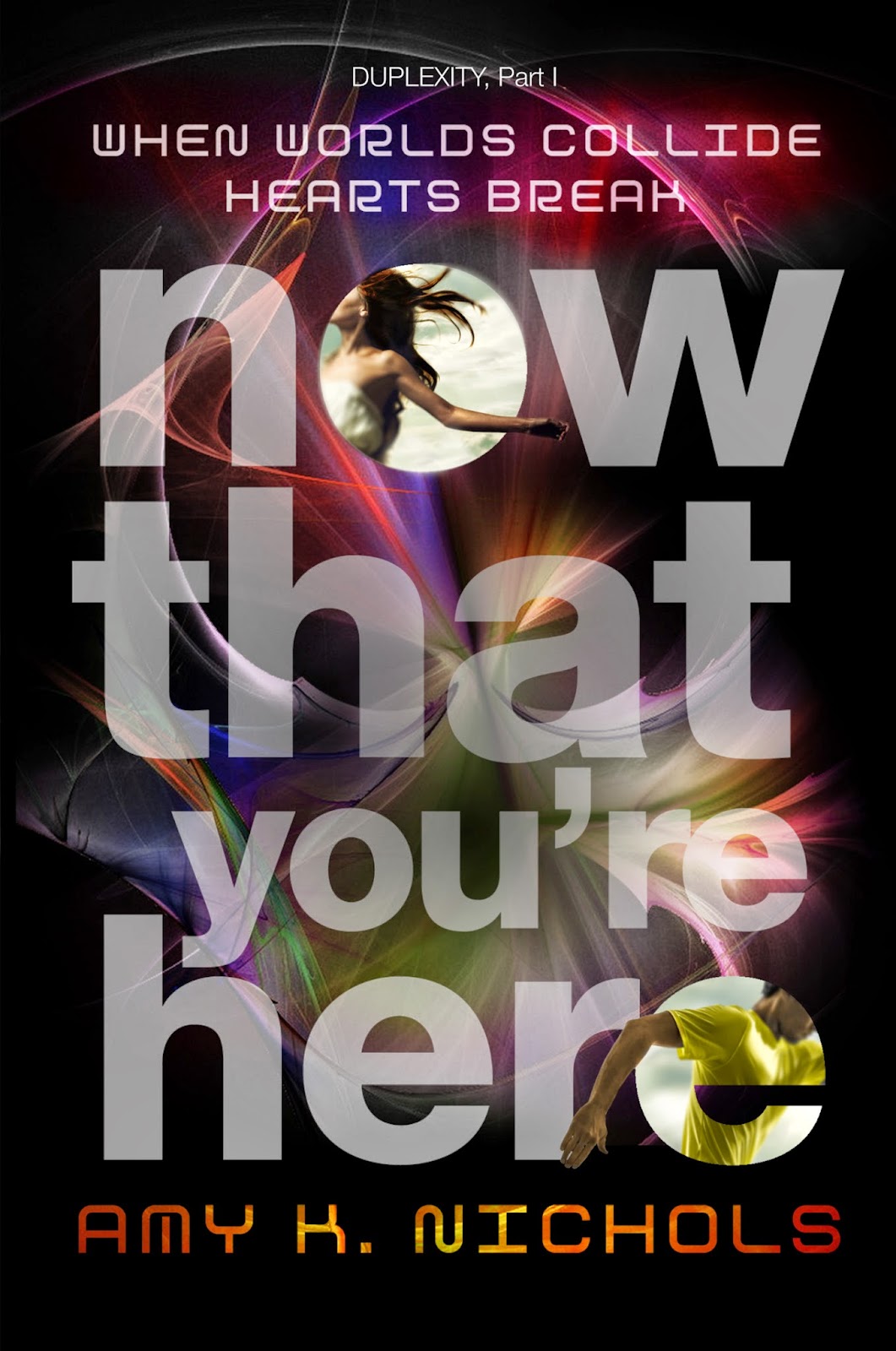 One minute Danny was running from the cops, and the next, he jolted awake in an unfamiliar body—his own, but different. Somehow, he’s crossed into a parallel universe. Now his friends are his enemies, his parents are long dead, and studious Eevee is not the mysterious femme fatale he once kissed back home. Then again, this Eevee—a girl who’d rather land an internship at NASA than a date to the prom—may be his only hope of getting home.

Eevee tells herself she’s only helping him in the name of quantum physics, but there’s something undeniably fascinating about this boy from another dimension . . . a boy who makes her question who she is, and who she might be in another place and time.

SOMETIMES WRITING LOOKS A LOT LIKE STARING AT THE WALL

I used to do contract work in writing, graphic design, web design, you-name-it, and again and again I ran into this quandary: should I count the time I spend thinking about a project as billable hours? Because it isn’t like you just sit down at the computer, press some keys and poof! Here’s a website! Or poof! Here’s a new company logo! No. The reality is, there’s all this time where you’re just sitting there, staring at the wall. Sometimes you might doodle on a legal pad or sticky note or the back of a pizza box, but mostly, you’re just thinking. All the hard work is happening up in your head.

It’s the same when it comes to writing stories. There’s a lot of staring at the wall, or off into space. Your children or your partner walk in and see the far-off look in your eye and think you’ve gone catatonic…and in a way you have, except really you’re up there in your brain, hacking through the thorny brambles of character arcs and plot twists. While it looks highly unproductive to others—particularly that client that doesn’t want to pay much for his website—staring into space is an essential part of the creative process. I’d go so far as to say it’s one of the most difficult parts, too. Often front-loaded at the beginning of a project, it can feel a lot like procrastination. Like, you have this novel to revise on a deadline, and the first whole day or so, you’re just sitting there, staring out the window. But here’s what I’ve learned: it’s okay. Stare out the window until your eyes dry out and shrivel up like raisins if that’s what it takes to find the story.

SOMETIMES REVISIONS WILL TURN YOU INTO A FERAL, FOUL-SMELLING CREATURE OF THE NIGHT

It was around the time I got to the line edits stage of Now That You’re Here that I just resigned myself to the fact that for the next month I would be holed up in my writing cave, staring at the walls (see item above) and mumbling unintelligibly to myself while my family and friends—heck, the world—carried on without me. I had a story to rewrite. Bye-bye, social life! My real friends will be there when I’m done. Food? I’ll just survive on the crumbs in the bottom of the Dorito bag that’s been sitting on my desk since forever. Hygiene? No one will see me, squirreled away in this cave anyway. Sleep? Who has time for sleep when there are deadlines to be met?! When I heard the children’s voices outside the door asking, “What’s that smell?” I decided maybe I could spare a little time to shower. I’M KIDDING. It wasn’t that bad. (Almost.) But seriously, going through revisions can be utterly transformative. Maybe I just had super tight turnaround times and bad time management skills, but I found that in order to get revisions done without losing my mind, I had to lose myself to the work. I learned how to eat, sleep, and breathe revisions until revisions were done. Then I emerged from my writing cave, bleary-eyed and babbling, held the finished manuscript aloft and declared, “It is done!” My family gathered around me, weeping tears of joy (or perhaps crying in reaction to my stench) and asked me to never, ever write a novel again.

SOMETIMES YOU WANT TO THROW THE WHOLE THING IN THE TRASH

I’m convinced there’s a point in every creative project where everything looks like a big pile of dog doo and all you’re doing is poking it with a stick. I call this the Ugly Phase. Doesn’t matter if you’re writing a novel or sculpting a statue from clay, there’s a point where you decide (sometimes out loud, for everyone to hear) that this is the worst thing you’ve ever made and it should be burned with fire. This isn’t right, you think. The vision you had for this story was so much prettier than the dreck you’re now spewing onto the page. In fact, you’re this close to calling up the Big Publishing Company and telling them they can have their advance back because obviously you’re a fraud who can’t really create anything except ugly piles of poo. My husband always laughs at me when I reach the Ugly Phase. He reminds me how I always hate what I’m creating while I’m creating it, and that before long I will stand back and declare, ‘Look! I’ve made a swan!’ (He always says that part in a high-pitched Monty Python-esque voice while flouncing his hands around. I interpret this as the signal to punch him.) But the thing is, he’s right. I do always say the thing I’m creating is garbage because in that moment—for me—it is garbage, and as such it should be carried out unceremoniously and tossed into a bin. Except…

Just when you think you can’t poke the stinking pile of poo with your little stick anymore, kablam! Your head explodes with the perfect idea that catapults you through revisions, right across the finish line. Your fingers fly over the keys, trying to keep up with the words buzzing through your brain. It’s as if you’ve plugged right into the source of all the mysteries of the universe and every word gracing the page is made of the stuff of stars. Honest-to-goodness star-stuff, shooting right out of your brain through your fingertips to the page. It’s magical. It’s kittens and rainbows. You begin to hear the voices of your agent, your editor, your mother, telling you that this is the best thing ever and you deserve to eat all of the chocolate in the world.

SOMETIMES YOU’LL WONDER IF IT’S WORTH IT

There were times when I was working on Now That You’re Here that I wondered if it was worth it. Spending time away from friends and family. Living a sort of dual existence, with one foot in the real world and the other in my fictional one. Wracking my brain for ideas. Wringing out my heart for every drop of emotion. All the while, trying to keep the fear of failure at bay. It was grueling. Far more grueling than I ever imagined. But I learned that I’m stronger than I imagined, too. It turns out I was up to the task, even though I doubted myself along the way.

I know there are some reading this who are hoping to be published, and you’re gobbling up all the writing stories and advice you can find because there’s something about imagining it that makes it feel a little bit closer, a little more possible. I’ve been there, and I know there are a lot of voices telling you how hard the journey can be (including my own voice in this post). But if you hear nothing else, please hear this: it’s worth it. It’s worth the solitude and the effort and the long nights. It’s worth the lack of showering and living off Doritos and missing coffee with your friends. And when you emerge from your writing cave, hold your manuscript aloft and declare, “It is done!”, you’re going to find you’re strong enough to make the journey, too.

Amy K. Nichols lives on the edge of the Phoenix desert with her husband and children. In the evenings, she enjoys sitting outside, counting bats and naming stars. Sometimes she names the bats. NOW THAT YOU’RE HERE is her first novel. Visit her online at amyknichols.com.