I Made A Bread

I’m a pretty inventive guy and so I think we can all agree that I’m the first person who thought to bake a loaf of bread during these here Quarantimes. I’m a pioneer on this one, a bonafide frontiersperson — I thought, gosh, there’s all this flour around, and there’s yeast in the fucking air like a miasma of squirming microbial mist, and so I decided to invent the very concept of baking bread during lockdown. I know, I know. You don’t need to thank me. Acknowledging my originality is enough.

Okay, not really. I have, as Maryn McKenna said of herself on Instagram, become a quarantine cliche. I decided it was time to join the CARBOLOADING MASSES and make some goddamn bread.

I’ve always wanted to do it, and never really had the courage or the patience to try it — I’m generally not the baker in the family. I do all the cooking, but nearly zero of the baking. My wife has an orderly, well-kept mind, and my brain is like a box of otters shaken up and dropped into a tiny tornado? So, cooking works for me. Lotta improv. Lotta feeling your way through it. Lotta just… having a sense of how to build and layer flavors over time.

Baking is unforgiving, though. YOU FUCKED UP, say the baking gods. YOU DID NOT ACCOUNT FOR HUMIDITY AND THE AGE OF YOUR BAKING SODA AND NOW THOSE COOKIES ARE LIKE SOFT LUMPS OF HALF-ROTTEN TREE BARK, YOU PIECE OF SHIT. I do not know how to appease the gods of flour and sugar. Just the same, I’ve always wanted to smell the scent of baking bread in our house. Just to see. Just to try it.

We of course couldn’t find yeast, so I decided to, as all of you have, make my own sourdough starter, and at about seven days it was looking aerated and frothy, and smelled good — but I was also not sure it was ready for primetime. So, I decided to use some discarded starter and put that in this recipe that I found from author and awesome human Amal El-Mohtar’s Twitter feed. (You follow her, yeah?) And I’d long been taking inspiration from Seamus Blackley, who, sure, whatever, is the father of the Xbox and all that, but who also has made BREAD from ANCIENT SUMERIAN MOON YEAST (I might be misremembering the details on that). So, I knew I was not the person for this job, but I decided, fuck it, let’s do it anyway. Lockdown Quarantimes are all about experimentation and failure and so away I went. (I did eventually find yeast thanks to a friend.)

The key to the recipe I used above was the sourdough starter discard replaced a 1/2 cup of the water and 3/4 cup of the flour — and in that recipe I cut the yeast requirement in half, too.

And then I did it in a Le Creuset enameled dutch oven, 7-qt.

And this is what emerged: 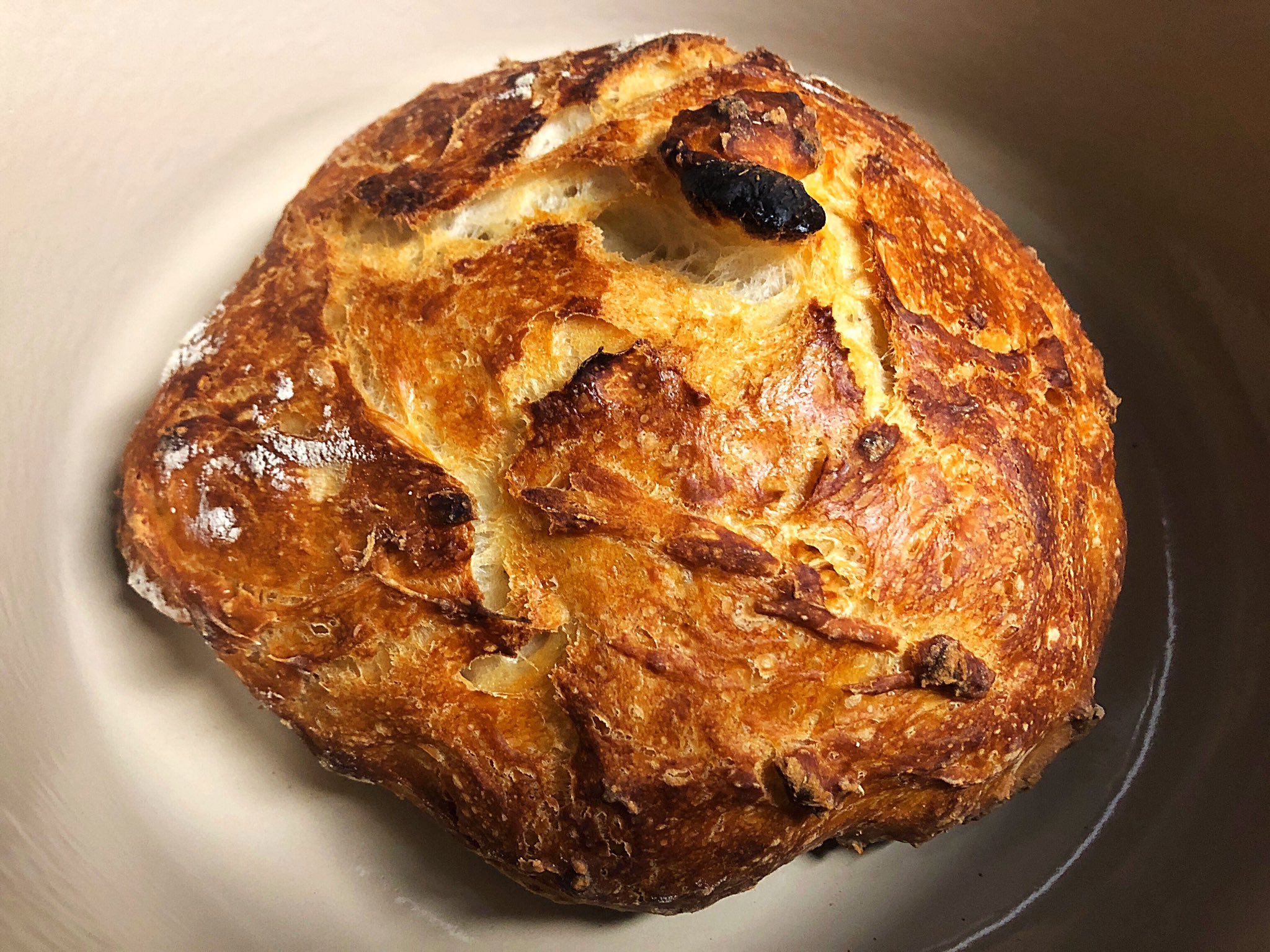 It was… pretty great?

I tried it: plain, with butter, with butter and strawberry-basil jam, with cheddar cheese, and then this morning with melted cheddar and a runny egg and a splash of olive oil in a breakfast sandwich and damn. It was really good every time. Soft on the inside, crusty on the outside. A little overdone in some patches on the bottom in terms of its toughness (not flavor), but for a first loaf, I’m exceedingly happy. And proud of myself just for trying it.

THEN I was like, fuck it, I’m doing it again. So this morning I baked up a proper sourdough loaf, starter only, using bolted wheat flour. Stuck to the enamel a little, but got it out. Haven’t consumed it yet. Visual results here.

I’m pretty geeked. Might fuck with some pretzels or even bagels, I dunno. I did find that breadmaking was closer to cooking than traditional baking — there’s definitely some improv in there, some culinary carbo-jazz, some room for imagination and fuckery. A bit of art to go with the science. Which I like. That suits me. Maybe it’ll suit you too.