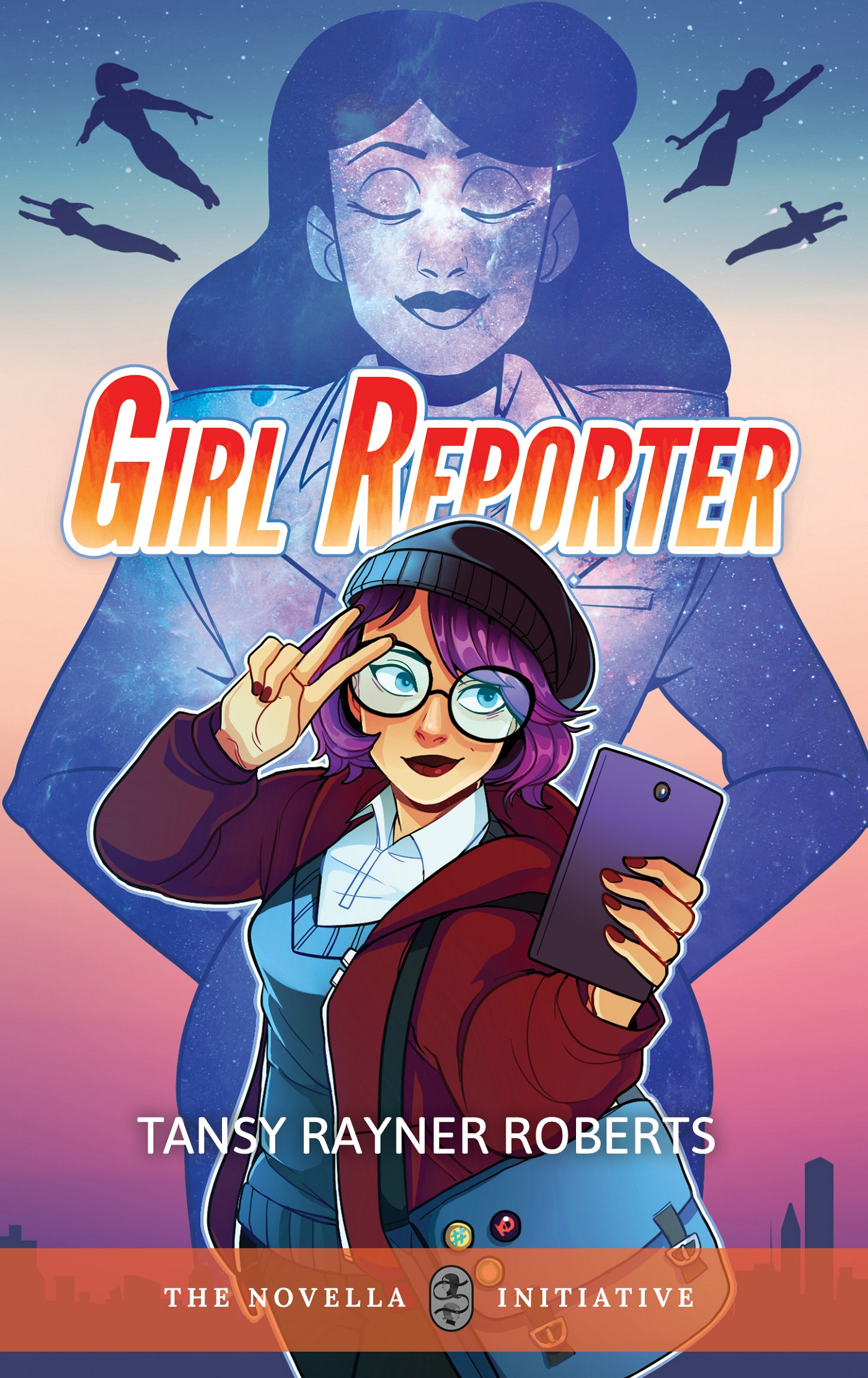 From the award-winning author of Cookie Cutter Superhero and Kid Dark Against the Machine comes a brand new novella about girl reporters, superheroes, and interdimensional travel

In a world of superheroes, supervillains, and a machine that can create them all, millennial vlogger and girl reporter Friday Valentina has no shortage of material to cover. Every lottery cycle, a new superhero is created and quite literally steps into the shoes of the hero before them–displacing the previous hero. While Fry may not be super-powered herself, she understands the power of legacy: her mother is none other than the infamous reporter Tina Valentina, renowned worldwide for her legendary interviews with the True Blue Aussie Beaut Superheroes and her tendency to go to extraordinary lengths to get her story.

This time, Tina Valentina may have ventured too far.

Alongside Australia’s greatest superheroes–including the powerful Astra, dazzling Solar, and The Dark in his full brooding glory–Friday will go to another dimension in the hopes of finding her mother, saving the day, maybe even getting the story of a lifetime out of the adventure. (And possibly a new girlfriend, too.)

I still have a lot to say about superheroes.

I talk about superheroes a lot, in my everyday life. My kids and borrowed kids have grown up in a world of superhero media and my longtime love of the genre has grown a lot over the last decade because of that.

When I wrote “Cookie Cutter Superhero” for the diverse YA anthology Kaleidoscope, I felt like that was my superhero story. It said a lot of things that were important to me, particularly about the role of women in super teams. It was short and punchy and done. Then I started to get comments about how much people wanted it to be a novel, which… okay, it’s lovely, I’m not going to whinge about that feedback. But I didn’t want to write a novel about superheroes. That’s why it was a short story.

Then the Book Smugglers slipped under my defences, with their Year of the Superhero short story theme and it turned out I had one more superhero story in me: Kid Dark Against the Machine, a love letter to teen sidekicks.

I was done. I was totally done. But then Ana and Thea asked me if I could write a novella set in the universe and… well. Okay. I still have a lot to say superheroes. But this time, I wanted to write about the women who report on superheroes, the love interests who don’t actually get to punch robots. Friday Valentina and her mother fell into my head as if Lois Lane herself had thrown a typewriter at me.

I may never be done writing about superheroes.

Everyone has a little smashed avo to unpack.

I’ve been making fun of the “Millennials are killing…” memes for almost as long as they’ve existed. Australia literally invented the story about how eating decadent brunches involving avocado toast was the reason that 20-somethings weren’t starting mortgages as early as their parents did.

A big part of Girl Reporter was about showing the generational divide in media… comparing an old school broadcast journalist’s career to that of a young vlogger with all the social media at her fingertips.

But I went too far. My editors pointed out that I had written myself into a binary corner in the first draft, with too much separation between new and old media as if they are different things (spoilers: it’s all media). Worst of all, I’d had Friday falling into the same habits as the older generation, sneering at the contribution of the younger women coming up after her.

I’d done the thing I usually criticized in others, going for the easy joke based on a stereotype. So that was embarrassing.

Rewriting is a pain, but it feels good to make the universe better, even when it’s your own fictional universe. Lift as you climb became Friday’s mantra.

Sometimes you have to steal from yourself.

Readers of my fantasy novel Ink Black Magic will laugh at me when they get to the scene where our heroes are transformed into retro parodies of their own superhero costumes. I didn’t realise I’d copied myself until it was TOO LATE to take that scene out because I loved it too much.

Kill your darlings? Pfft. I will defend my darlings to the death, even against myself. Fight me.

When my editors asked me to add a sex scene to tie the story up at the end, that part was easy. I adore writing sex scenes, and I wrote this one in a single sitting, without hesitation.

I once read a ‘how to’ guide on writing sex that said a scene can either be sexy or funny, not both. I have pretty much made it my mission in life to prove that advice wrong with everything I write. You learn so much from characters when you see how they turn each other on, and you learn even more when you find out what makes them laugh.

…but Romance is hard.

Writing romantic storylines are agony for me. I admire romance so much in other people’s books, but there’s something in me that always wants to undercut the moment, to leap over the tension and tropes and pretend they don’t exist. To skip to the good part, where the relationship is established and there are inside jokes and someone’s making a cup of tea.

Writing romance embarrasses me in a way that writing sex doesn’t, and I don’t know what that means about me as a writer! I’m still working on it.

What I do love to write is unromance. The characters that hook up because it’s convenient and need an intervention to figure out they’re genuinely into each other. The ones who aren’t ready to make the leap of faith yet (and oops, too late, the story’s over). The ones who admit they want to kiss each other right away, because who can be bothered with ‘will they, won’t they?’ Given a choice between star-cross’d lovers and the friends who stand on the sideline making fun of the star-cross’d lovers, I’ll take Beatrice and Benedick every time.

The central emotional relationships in Girl Reporter are about family – Friday’s baggage about her busy mother and unknown father, her intensely platonic ‘you’re my brother now, live with it’ friendship with Griff. Her romance with one of the female superheroes sneaked into the margins of the story, playing it cool, pretending it was no big deal.

(I fell in love with them anyway)

There’s another sneaky romance in Girl Reporter too, which also manages to be both sweeping and epic. Trust me. You’ll know it when you see it.

TANSY RAYNER ROBERTS is an award-winning writer of science fiction, fantasy, feminist essays, and humour. She lives in Tasmania, Australia, with her husband and 2 superhero daughters.