Rob Hart: How To Put The Toilet In The Right Place

Rob Hart is a cool dude and he wanted to write a post about outlining and that seems all nice and good and sure, fine. But then he went ahead and named it HOW TO PUT THE TOILET IN THE RIGHT PLACE and I was in love. Now Rob won’t respond to my texts (sorry, “dick pics”), and he changed his locks but ha ha ha he doesn’t know that I found a way in through the vents and now live in his basement.

I went into my first novel without an outline.

It was like if you’re building a house, but the blueprints are constantly getting changed, and the builders aren’t communicating, and suddenly there’s a toilet next to the fridge. And you have to figure out how to move it, but once you do, it screws with the plumbing lines…

So you hammer away and hope it comes together in the end.

And it did, mostly. I am immensely proud of New Yorked, but looking back, I see the gutted piping that didn’t get relocated. Publishers Weekly, in their review of New Yorked, said:

“The book’s relentless pacing and strong sense of place (happy face) compensate for the incoherent plot line (sad face), which prevents it from being truly effective (very sad face).”

It sucks to hear, but it’s not an unfair point.

One of the lessons I learned from New Yorked is: I’m the kind of writer who needs an outline. I knew the beginning and I knew the ending, but the middle—that’s where the plans got mixed up and the basement stairs suddenly led to the roof.

So for my second book, City of Rose, I knew I wanted a strong set of blueprints. The question was: How? There’s no one right way to outline. So I took a couple of tries, sketching things out, jotting down ideas.

Then I came across something that really worked for me.

I got myself a notebook, and I wrote up a list of characters. Then I went chapter by chapter, and wrote a couple of sentences for each one—the setting, what happened, how it would lead into the next chapter.

Once I was done, I trashed it. Ripped it right out of the notebook and threw it into the garbage can on the Staten Island Ferry.

A few days later, I did another outline. Characters, chapter-by-chapter breakdown. All from memory, all without referring to anything else.

I threw that away, too.

A few days later, I did it one more time.

That outline, the third one, I kept.

So, what’s with throwing away all this paper, you ask? Is it because of my deep-seated hatred for trees?

No, wait. It’s because the second time I did the outline, I’d had some time to think. The plot threads marinated, the characters broke apart and reformed into stronger versions of themselves. I remembered all the things I was excited about, forgot all the stuff that didn’t really matter, and even came up with some new ideas along the way.

The third time was the charm. The final book isn’t exactly what I sketched out, but it’s pretty damn close. I wrote and delivered City of Rose within a space of six months. A far cry from the five years of New Yorked. And the best part of that is: I think it’s a better book.

Publishers Weekly seems to agree. In their review of City of Rose, they said “readers will enjoy [Hart’s] playful, jaded hero and twisty plot (happy face).”

It worked. Not to say any of this is going to work for you. Not every bit of advice is right for every single writer. But in the grand scheme of writing advice, I like to this this is a little more concrete than the often-conflicting stuff I’ve seen out there (write every day, write when you want, write drunk, write sober, write when the moon is in the seventh house…)

But if you’re the kind of person who feels like you need an outline, and the outline doesn’t always come together on the first pass—try not using the first pass. Junk it. Give it some time to gestate, then use the second, or third, or fourth, or hundred millionth.

Bonus round: I also found it helpful, after I finished the first draft of the book, to summarize each chapter on an index card, then sit with the cards and angrily stare at them while I drank a big glass of Jim Beam.

It was useful for seeing the breadth of the story, figuring out the pacing, finding where things happened too quick or too slow, etc.

Anyway. That’s me. That’s how I took a problem with the first book and fixed it the second time around. I’ve been doing this for all my new writing projects, and it’s really helped me feel like I’m proceeding on stable footing.

That is to say, the toilet ends up where it belongs.

What about you? Do you outline? Or do you write by the seat of your pants and hope you find the story in the process?

Do you have a process, different from this, that works for you?

Rob Hart is the author of New Yorked and City of Rose. His short stories have been published in places like Thuglit, Needle, Joyland, and Helix Literary Magazine. Nonfiction has appeared at Slate, the Daily Beast, Nailed, and the Powell’s bookstore blog. You can find him on the web at www.robwhart.com and on Twitter at @robwhart. 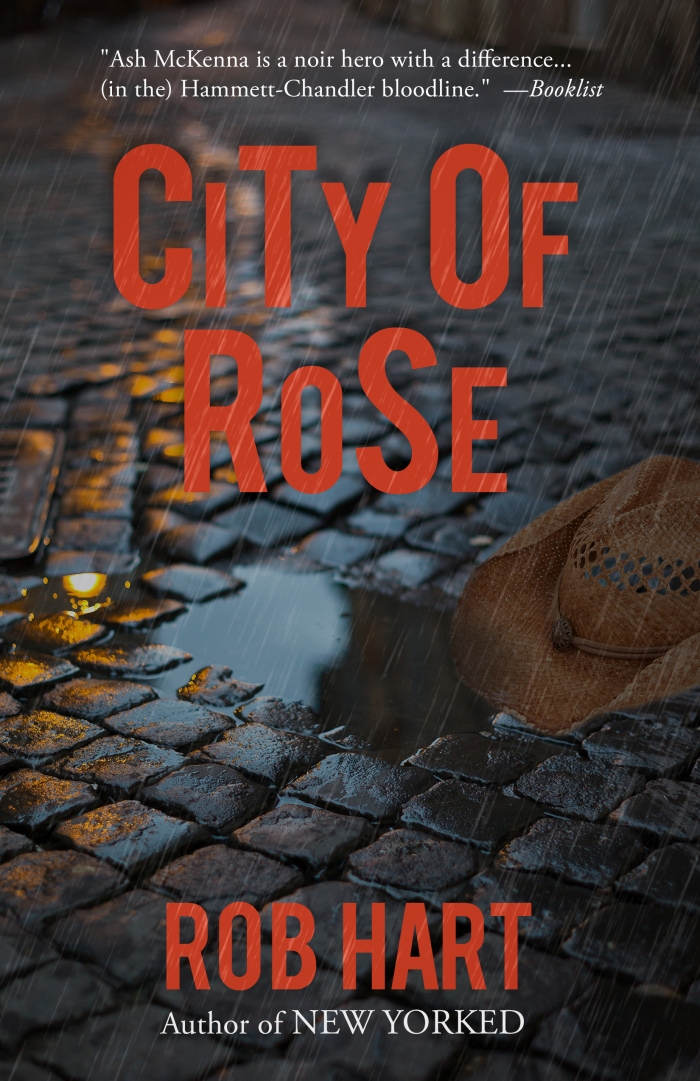