No One’s Coming To Save Us, So We Have To Save Each Other 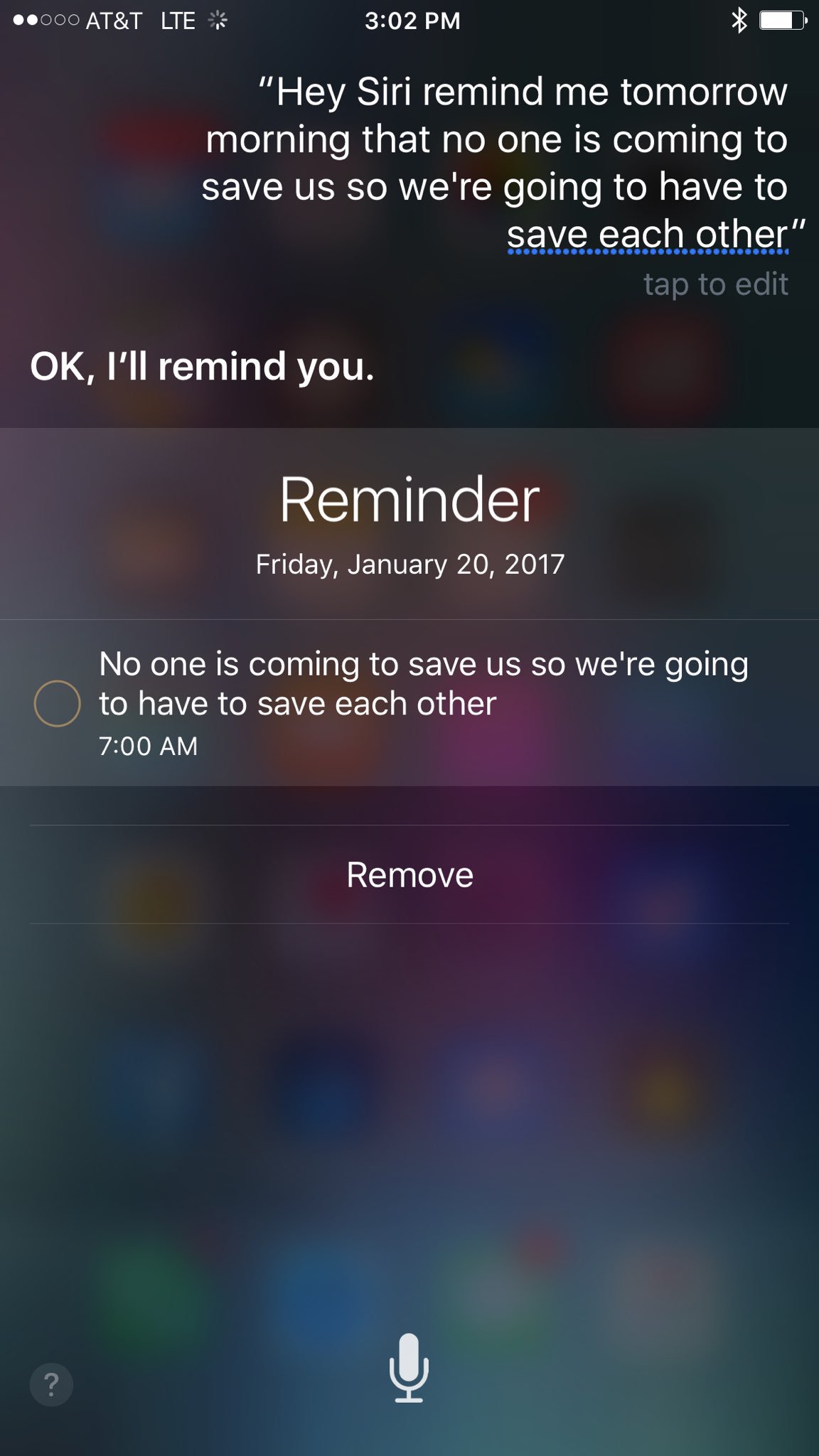 I set that as my 7AM reminder this morning.

I set it because, I dunno, maybe up until this point I’ve been hanging onto a loose and fraying thread that clearly, surely, some savior force would come in and reverse what was coming. The vote would prove to be rigged. The “OMG RUSSIA DID IT” investigation would advance to the point of no return. Obama would rip off Comey’s mask and reveal Old Man Giuliani underneath, who would’ve gotten away with it if it wasn’t for you crazy Millennials. Joe Biden would challenge malarky-havin’ Comrade Dumpkov to a ski contest on the K2 and he would win the day against the rich punks for all us underdogs and underachievers. I dunno what the fuck I thought was going to happen. Probably nothing, but maybe something.

No one is coming. Our plane crashed, and we’re alive, and no help is on its way.

That sounds dramatic, I know, especially to people who think this isn’t a big deal — but we’re staring down the barrel of a president whose stated intent is to sand down nearly every foothold we’ve gained in the last several decades. Worse, he’s got the run of the table with a Congress who has already begun their monstrous rending and flaying. Everything’s on the chopping block: women’s rights, health care, the free market, arts, humanities, science, education, national parks, bald eagles, anyone who has ever been marginalized, you, me, all of humanity, the whole fucking planet. Pounds of flesh cut from those who cannot afford to lose them, and given over to the vampire kings above us who want to bleed us all dry. It’s not dramatic to think that, at the very best, we’re going to experience an existential tumult over the next four years. At the worst, I dunno. At the worst we get hill cannibals, probably. Nuclear hill cannibals.

No one is coming.

But we are alive.

And we are together.

That means something. I don’t mean that in a glib, WE ARE THE WORLD way, I don’t mean it to be some kind of shallow sing-a-long. I mean that our president — the one who comes with the biggest winking-butthole-asterisk of all time by being a president who won by losing, who won with the help of shady Kremlin no-good-niks, who won by surfing to the White House on a churning tide of sexual assault and racism and inane non-policies, who still hasn’t filled most positions, who wants to fill his cabinet with the swamp monsters he exposed by draining the swamp — our president is way the fuck outnumbered. This is our asterisk president. This is a president who we didn’t earn, who didn’t win, who has a historically low approval rating and a historically high disapproval rating. He works for us, and we outnumber him by heroic numbers.

That’s a real thing. That’s truth. It’s not arguable that he’s surrounded by a miasma of illegitimacy. He can earn his way out of that — he can clear the fog by doing right for all Americans, not just the richest among us — but let’s be clear, the likelihood of that happening creates betting odds no gambler would take.

No one is coming.

But we are alive.

And we are together, and we can save each other.

My honest answer is, I don’t yet know. Not really. Because I don’t know what’s coming down the pike. I know the next four years will be contentious, but I don’t know if they’ll be ruinous or simply bizarre. But here’s what I think it means.

I think it means we can be there for each other. And we can be kind. We can help each other up.

It means we can use what power we have to help those who have less power.

It means making each other laugh, because oh Sweet Saint Fuck, we’re gonna need to laugh.

It means staying involved, and keeping up the pressure, and using our voice and our vote not just for our behalf but for the behalf of our neighbors.

It means sharing the things we love: art and books and movies, quotes and images and ideas.

It means knowing who our enemies are, and pointing our metaphorical weapons to those outside the trench, not to those hunkering down in the mud alongside us.

It means kitten pictures and dog videos and other forms of random comfort, and of course what I mean is otters, because fuck yeah, otters, you can’t deny the healing power of otters.

It means turning an ear to listen and offering a shoulder to cry on and letting people just wordlessly shriek at or near you for as long as they need it.

It means working around the system to find new ways to keep each other afloat — it means giving money to the ACLU or Sierra Club or it means demanding our companies do better for us even when our government won’t, it means finding loopholes and trapdoors that help us to help each other, it means empowering others to do the work when it’s work we can’t do ourselves.

It means harnessing the one-two-punch power of Critical Thinking and Empathy, which not coincidentally are also the names of each of Uncle Joe Biden’s malarky-thumpin’ fists.

It means being good stewards of this planet because we all share it, and no matter what the administration wants you to believe, it’s our responsibility not to fuck it up.

It means creating art and telling stories because stories have power, stories help us through, stories provide a narrative for those of us now and those who come later.

It means helping ourselves and practicing self-care because sometimes before you help someone else with their oxygen mask you gotta make sure yours is on nice and tight.

It means whatever it means going forward.

I’ll be here at the blog and online if you wanna swing by and say hi. Hope you’re doing okay. Fuck the inauguration. Go to a protest. Check out a museum. Read a book. I’ll see you on the other side.