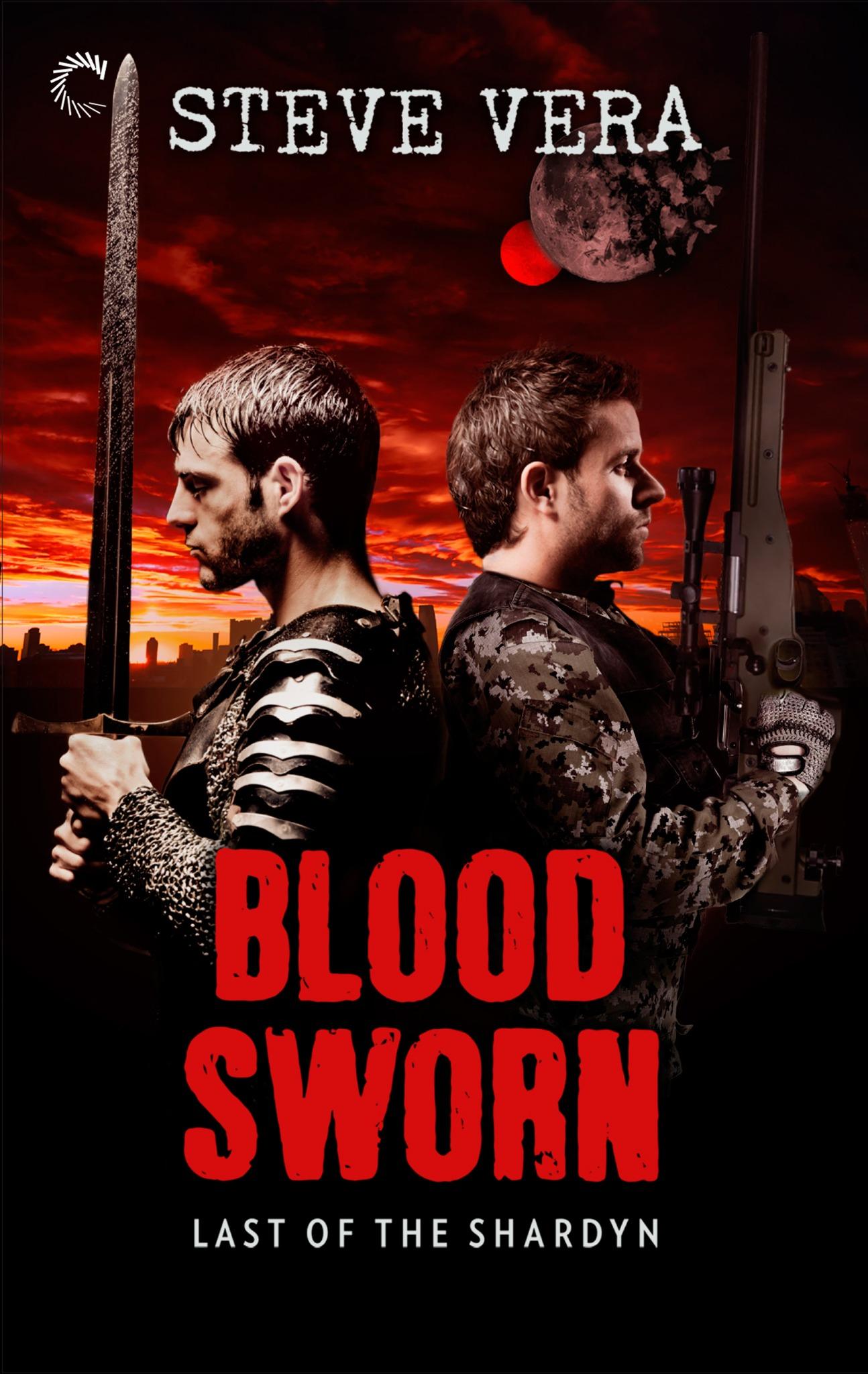 Veteran police chief Skip Walkins has really done it this time. After crossing realities to fight the onslaught of the Drynn, the spawn of the Underworld, he’s one of only a few motley survivors of an epic massacre. By his blood, he’s sworn to unite with Shardyn Knight Gavin Blackburn against the armies of Asmodeous the Pale, Lord of the Underworld and ruler of the Drynn. The two must seek resistance fighters wherever they can—even in Vambrace, among those who killed Gavin’s father.

Reformed sociopath Donovan Smith has traveled to Vambrace for his own reasons—the new voice in his head claims that there he will learn how he came to be the Antimage, impervious to the deadliest magical attacks.

Donovan’s secrets may hold the key to defeating the Drynn, but they may upset the delicate alliance of the Blood Sworn in the process. And if Skip and Gavin can’t fight together as one, the Drynn will attain total victory over Earth and its magical twin, Theia.

You’d think I had five eyeballs or something for saying this but according to the Twittersphere and my own little unscientific poll, most authors prefer editing to writing. That’s just craziness. My childhood vision of author-hood was of me sitting at a computer blurring my fingers across a keyboard while laughing maniacally. Not quite. Sure, editing can be gratifying, sculpting my thoughts into strings of rhythms and cadence, but after a while, my brain melts. To me, editing is like taking out a load of laundry without a basket—there are always a couple of socks that want to squirt out. Thank God for awesome editors.

So there I was, my head a Roman Candle, my brain spontaneously combusted. Looming deadline, panic setting in. Solution? Why, the Rocky IV training montage, of course. I had no choice. For two weeks I wrote in an artist’s sanctuary cabin, (thanks, Abby!) way out in the woods, all by myself, in the dead of Autumn. It was stupendous, yes, but those nights when the words on the screen would wriggle and my thoughts would leak out of my ears, I’d step outside onto that porch into darkness so black it had weight, and after listening to the night for several long minutes (it was creepy out there, when muskrats sound like grizzlies) I’d put in my headphones, let the music pour into me, and refill my wellspring with Rocky, Chevelle and O Fortuna. After twenty minutes or so I’d open the door, step back into the light and go for another round. Over and over again. I need some new playlists, by the way, if anybody’s feeling generous or has some suggestions…

3)    THE CREATED BECOMES THE TEACHER.

Come again? How can a character, something I created turn around and teach moi? If I may? One of the arcs in Blood Sworn is that a sociopathic murderer is forced to become one of the greatest generals ever to live. Somebody’s got to fight off the Underworld. Anyway, whether he can actually suppress his violent impulses is a secret, preciousss, but one of his gifts is a photographic memory. And our dark hero is well-read. In his mere twenty years of life he has studied The Art of War by Sun Tzu, as well as Clausewitz, Jomini, Machiavelli, Thucydides, Robert E Lee and a slew more. Long story short…he knows his shit. Of course, in order for him to know, I have to know. Anything less would make me a fugeize-face. Here’s the interesting part. In my research, which was rather extensive, I found myself becoming more strategic, better equipped to deal with the challenges life was throwing at me—even made me a better chess player. I found that simply by being in proximity to so many masters actually influenced me. I won’t plunge you all into detail, but every morning with my coffee (light and sweet, baby) I read the Denma translation of The Art of War as well as the three essays that accompany it. Part of my life now.  And I beat Jerry’s butt all the time in chess —mwa ha ha, I mean, er, it’s good.

4)    THE MOST IMPORTANT QUALITY FOR AN AUTHOR: RELENTLESSNESS

“Exertion is never giving up, but it isn’t wearing oneself out. It’s more like riding the wind than pushing a rock uphill.” I got this little beauty from one of those essays I was just talking about and man—life-changer. I figured if I didn’t quit…I wouldn’t fail. Worked quite nicely. (Denma Translation Group. “The Sage Commander.” The Art of War: The Denma Translation. p.109)

Not even a contest. In college, I learned what a gerund is and how to dismantle a compound-complex sentence. Need a prepositional phrase to go with that BLT? Here ya go. Important for a writer? Sure, bordering on of course. But as a Dungeon Master, I learned something far more important…how to tell a story and how to research. I’d spend a month setting up a quest, researching medieval cities at the library (back in ancient times before the internet), creating voices for characters; I’d know every tavern owner, weapons smith, evil sorcerer, and drool-spitting troll right down to the eyelash. I loved the expressions on my friends’ faces when their eyes would widen and their mouths would part as I calmly explained to them that there was a long, brittle scratching coming from behind the door they were supposed to go through followed by a deep growl. And then I’d wham on the table! Priceless. Wouldn’t change those memories for the world. Take that, college.

Steve’s just a guy who wishes he could fire lightning out of his fingertips. Afflicted with wanderlust at the age of seventeen, he’s lived in seven states, briefly served in the U.S. Air Force as a Pararescue Trainee, and has a profound aversion to mint chocolate chip ice cream. Steve currently straddles two worlds—one foot in his hometown of Elmwood, CT, the other in Sunnyside, Queens, NY. What bio would be complete without a cat? Steve has one. A great, fat, good-for-nothing but entirely lovable furball who has his own gravitational force. If Steve could go back in time and be anything, he’d have been a P-51 Mustang fighter pilot or a knight. Being an author is pretty cool, though.