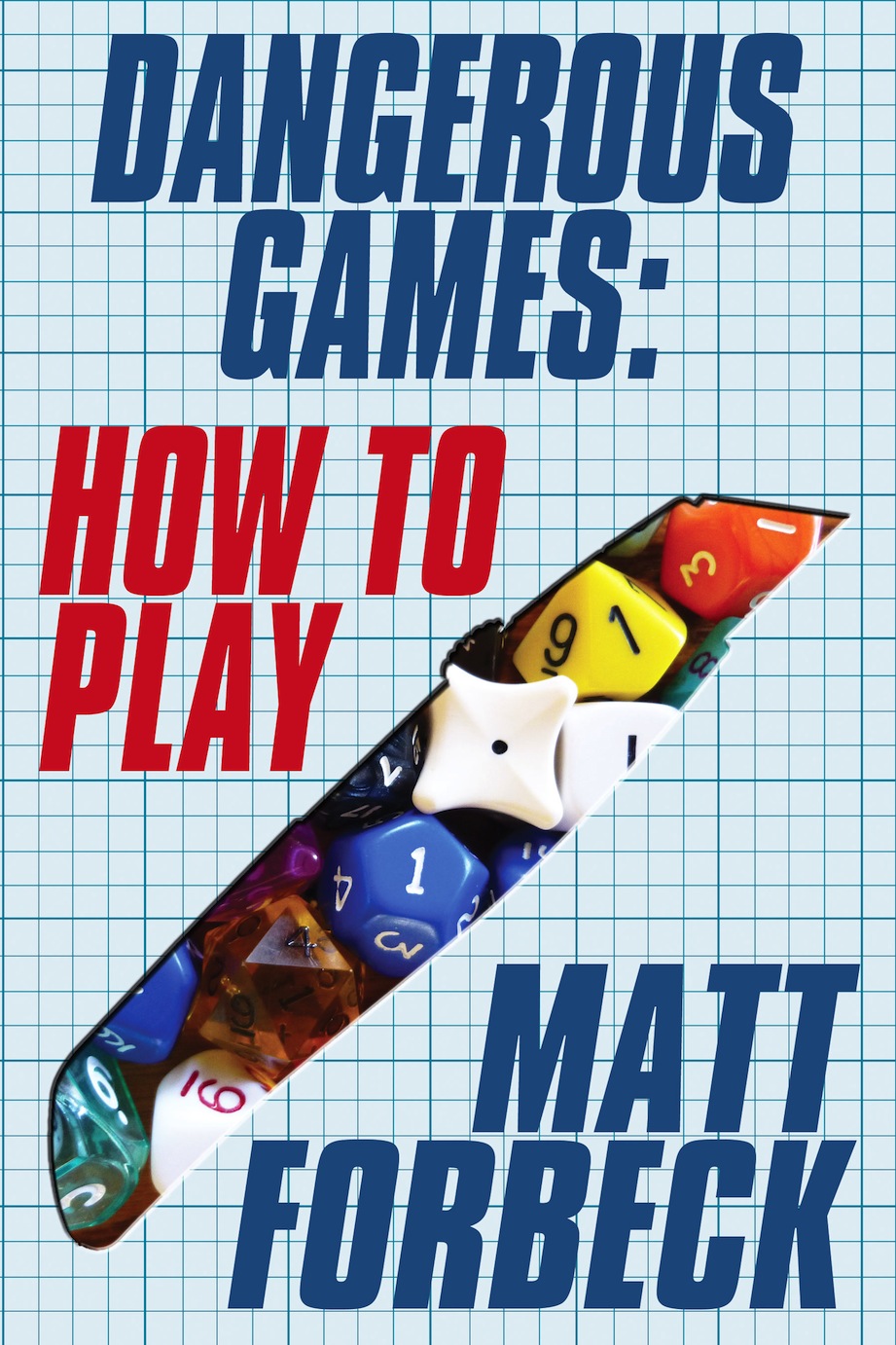 Matt Forbeck is one of the hardest working and utterly tireless sonosabitches in games and fiction. I think he’s attached to one out of every seven Kickstarter projects. Last I checked, he’s starting his 365 Novels In One Year project, where he writes 365 novels in a year. Or something like that. Regardless, the latest fruits of his Kickstarter labors is a novel set at the gaming convention known as Gen Con, and here he answers the dreaded ten questions:

TELL US ABOUT YOURSELF: WHO THE HELL ARE YOU?

On top of all that, I write for video games (Marvel Heroes, Ghost Recon Online, etc.), toys (Star Trek Mission Utility Belt), and comics (Magic: The Gathering). Plus, I run Kickstarters to help me self-publish other novels. Last year, I tried to write a dozen of them for my 12 for ’12 challenge. I fell short and only wrote ten novels, nine comic scripts, and an assortment of shorter work. So, at least I fail well.

In my home life, I’m the happily married father of five kids. That includes a 14-year-old boy and a set of 10-year-old quadruplets. (Given what I do for a living, it’s funny that the craziest thing about my life is really my kids.)

GIVE US THE 140-CHARACTER STORY PITCH:

Dangerous Games is a trilogy of thrillers set at Gen Con, the largest tabletop gaming convention in America. It starts with How to Play.

WHERE DOES THIS STORY COME FROM?

Literally? Kickstarter. I ran Dangerous Games as the third of the four trilogies I Kickstarted last year.

More figuratively, it comes from the fact that I’ve been going to Gen Con since I was a kid. This summer will be my 32nd year in a row and my 11th as a guest of honor at the show. As with most writers, once you spend enough time in a place, you start to imagine how it could all go horribly wrong. That’s how I came up with Dangerous Games.

I actually had this trilogy itching around in the back of my skull for years, but I had planned to run a different story as my third 12 for ’12 drive. I’d chatted with Jim Frenkel of Tor about it a while before, though, and he’d liked it, so I made sure to clear it with him before I started, just in case. He told me he wanted it, so I put that one aside for a while and picked up Dangerous Games instead.

That original notion, by the way, is called Loot Drop — a modern thriller with MMO elements — and it should be out from Tor in early 2015.

HOW IS THIS A STORY ONLY YOU COULD’VE WRITTEN?

Gen Con is my favorite event of the year, and I know it better than just about anyone who’s not actually worked in-house for it. I’ve run booths at the show, created scores of events for it, and I’m even on the panel of folks who help select the industry guests of honor these days. The people who run the con — Peter Adkison, Adrian Swartout, Owen Seyler, and the rest of their team — are great friends of mine, people I love, and I think that glows throughout the book.

More to the point, Dangerous Games isn’t just about Gen Con but about the hero, Liam Parker, achieving his dreams of getting his tabletop game published. That’s something I’ve been through and have been helping other people with for decades. As my pal Robin Laws likes to say, the number of full-time freelance game designers in this world is less than the number of astronauts. When you narrow that to full-time tabletop RPG designers (which I once was), there are more Chinese astronauts.

It’s a rare but fascinating profession — as you well know, having done it for years yourself.

WHAT WAS THE HARDEST THING ABOUT WRITING DANGEROUS GAMES?

I had to decide whether or not to put myself into the book as a character. It seems like an egotistical thing to do, so my first instinct was to avoid it. The trouble is that everything I know about the convention comes straight from my experiences with it, and that’s one of the book’s selling points. Stripping me out of it didn’t make much sense and would have involved a lot of strenuous dancing around the subject to avoid it.

So I put myself in the book. I’m not there a lot, but enough to have fun with it. My wife and kids show up for a bit in the later books too. My pal Ken Hite agreed to serve as the part-time mentor for my hero, so I got to write dialog in Ken’s voice instead, which was worlds of fun.

WHAT DID YOU LEARN WRITING DANGEROUS GAMES?

This is the first piece of original fiction I’ve written that had absolutely zero fantastic elements in it. No magic, no monsters, and no tech more advanced than what most of us see every day. It forced me to find intriguing material more in the characters and their motivations than in the world building, which is something fantastic stories tend to feature, and I found that refreshing and fun.

I also had to deal with writing about lots of people I know well, most of whom I count as good friends. It’s interesting to write about them with compassion and empathy but still leaving their flaws and eccentricities on full display. I can only hope they recognize themselves and think that I treated them well.

WHAT DO YOU LOVE ABOUT DANGEROUS GAMES?

I worked hard to capture the fact that Gen Con is a magical time for me. I really do love it more than a kid at Christmas. It’s a gathering of the gaming-geek tribe that transcends all of us, and it always inspires me and recharges my battery for another year of creating fun things to share with my friends. With Dangerous Games, I tried to put that front and center. It’s a dark story in some ways, but it’s painted against the background of the Best Four Days in Gaming.

I also loved putting so many of my friends in the book. I became more adventurous with the cameos as I went, and in the final book I wound up throwing in a slew of fantastic authors as part of the Writer’s Symposium at Gen Con — which I take part in too. Folks like John Scalzi, Brandon Sanderson, and Pat Rothfuss show up, and even Wil Wheaton pokes his head in for a bit.

WHAT WOULD YOU DO DIFFERENTLY NEXT TIME?

If and when I ever go back to writing thrillers at Gen Con, I’d take a whole different tack. I’d go with an ensemble cast of characters and a cunning mastermind running a secret game throughout the con, by which he hopes to take his revenge on them all. I considered doing that this time around, but I threw it out because I wanted to introduce readers to Gen Con first, and I needed a fresh-faced hero to accomplish that.

GIVE US YOUR FAVORITE PARAGRAPH FROM THE STORY:

I have a lot of favorites, but I’m going to go ahead and spoil everything with the last paragraph in the entire book. It’s actually not as much a spoiler as it’s a wink and nod to the readers, as everything’s been wrapped up well before that point. Anyhow, it reads:

“Well,” Matt said with a cunning glint in his eye. “Have you heard about this new thing called Kickstarter?”

WHAT’S NEXT FOR YOU AS A STORYTELLER?

After Dangerous Games: How to Play — which is out now — I’m releasing two sequels: How to Cheat and How to Win. Those should all be out this summer. They each take place at Gen Con in consecutive years, and we get to see Liam grow as a designer and a hero through those three years. The first is a mystery novel, the second is a crime novel, and the third is over-the-top action. I call it Die Hard meets Gen Con.

Meanwhile, I’m finishing up my YA series of Monster Academy novels from my fourth Kickstarter. Those will be out later in the year. After that, I move on to Loot Drop for Tor. It’s a busy year.